The cat was finally let out of the bag over the weekend as the Kardashian-Wests shared a gorgeous photo of their new baby son and revealed what they have called him.

It was revealed that Kim and Kanye were expecting a fourth child via gestational carrier back in January. Their baby arrived some time around 11 May with Kim declaring him the absolute bee’s knees.

“He’s here and he’s perfect!” Kim posted on Twitter, announcing her baby’s birth. “He’s also Chicago’s twin lol I’m sure he will change a lot but now he looks just like her.”

As fans waited for news of the latest instalment of Baby Names We Didn’t Expect, they speculated over what the child – a brother for five-year-old North, three-year-old Saint and 15-month-old Chicago (Chi) – would be called.

Zen West, Christian West, Hymn West and Sunday West were kind of close. Law West, Wild West and Mexico West less so. To fans’ delight, the speculation is over with the pair sharing a first photo, finally unveiling the name they’ve chosen. That name is Psalm West.

Kim revealed the name by sharing a text Kanye had sent to her: “Beautiful Mother’s Day. With the arrival of our fourth child. We are blessed beyond measure. We have everything we need,” he wrote.

Fans were unsure whether they liked it and immediately began googling “how to pronounced psalm” and “does psalm have a silent ‘p’?”

Yes, it does have a silent ‘p’ folks-who-are-confused and this choice comes as no surprise to those who follow this family. Kanye has been running his Sunday Service church services for many months. He’s made no secret of his interest in religion and spirituality, and the whole Kardashian gang are very regular churchgoers.

“K I didn’t think their babies names would get worse but it did,” another wrote.

“Psalm body tell them to rename their baby!!” someone else quipped.

(Indeed it will be Psalm Day every day at the West home and was perhaps a tiny bit foreshadowed in Kanye’s brilliant track Ghost Town.)

But many people were less worried about tiny Psalm’s name and more concerned about how he was sleeping.

He’s featured snuggled up in a cot that’s lined with all kinds of extraneous bedding.

“Please please please go pay an overpriced ‘sleep consultant’ to get all that unnecessary padding, bumpers, and blankets out of your child’s crib so they are not at risk for SIDS,” one medic wrote. “I’ve tried and failed to resuscitate too many children that have died this way. Signed, An ER doctor.”

“Please follow safe sleep habits,” a mother tweeted. “It can reduce the risk of SIDS. Everything about this picture causes me anxiety. #SIDSAwareness #LostMyDaughterToSIDS #LoveTheKardashians”

“1. Congrats! 2. Anyone else freaking out about all the blankets & bumpers?!” one father commented. “American Academy of Pediatrics recommends keeping the crib free of blankets and pillows until baby is 12 months old, as these can create a suffocation hazard. @kanyewest Just looking out for a fellow dad :)”

It’s an important point and hopefully, Kim will listen up and correct Psalm’s sleeping environment with more of a focus on safety. 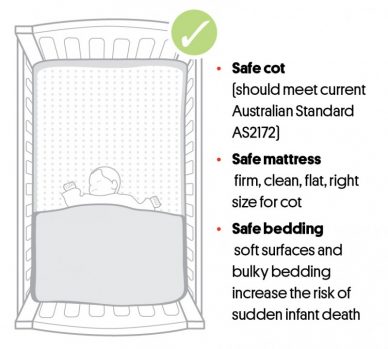 What bedding is safe for a baby?

“If a blanket is being used instead of a sleeping bag, ensure baby is placed with his/her feet at the end of the cot, tucking the blanket in securely underneath the mattress, so it can only ride up as far as baby’s chest and cannot cover his/her head.”

Red Nose also stresses that extra bedding – as shown in Psalm’s cot – is not safe.

“Ensure there is no soft bedding in baby’s sleep environment. Soft bedding (pillows, doonas, loose bedding or fabric, lambswool, bumpers or soft toys) in the cot is unnecessary and may cover baby’s face and obstruct baby’s breathing.”