Once upon a time, misinformation about teething was rife. In fact in ye olden days, teething issues were thought to be one of the leading causes of death in babies.

Once upon a tooth

This misconception was so widespread that in 1842 ‘teething’ was the registered cause of death for just under 5 percent of infants who died in London aged younger than one year old, and 7 percent of those aged between one and three years. Gosh only knows what the real cause of death was for all those poor poppets.

Primitive teething ‘remedies’ included all sorts of horrible things. We’re talking treatments like blistering and bleeding of the gums, or placing leeches on the feet or where teeth were thought to be emerging.

Teething has been debated and agonised over since mankind’s very, VERY early days. According to a Nature-published paper, “there are references to teething difficulties in the Homeric hymns from around 1200 BC and in the prayers of early Indian literature around 1000 BC.”

Blame it on the teething

By the 300s Hippocrates was attributing all sorts of ills to teething. He said: “Teething children suffer from itching of the gums, fevers, convulsions and diarrhoea, especially when they cut their eye teeth and when they are very corpulent and costive” (from 25th Aphorism, 3rd book).

It’s fair to say that he might have contributed generously to the whole teething chain-of-misinformation thing.

Rabbit and pigs’ brains were another favourite gum soother. Shudder. In a piece on the history of teething published in Nature, MP Ashley writes:

“There is a recorded cure from the fourth century AD, “If they are in pain, smear the gums with dog’s milk or hare’s brain; this works also if eaten. But if a tooth is coming through with difficulty, smear Cyperas with butter and oil-of-lilies over the part where it is erupting”. (Cyperas is a type of plant.)

It’s not just the Europeans who fancy rubbing gums with not-very-delicious things. In American folklore it’s suggested that babies will be soothed by rubbing a minnow (a tiny fish) where teeth are sprouting.

The French surgeon Ambroise Paré introduced the abhorrent approach of lancing babies’ gums, believing that teeth that were slow to emerge needed a clear pathway.

Thankfully lancing – literally cutting open the gums to expose the teeth – was abandoned, but not until the 1930s.

By the 1800s parents were also drugging their babies to help ease their teething woes. There were lots of different preparations on the market which promised to “give rest to yourselves and relief and health to your babies”.

Unfortunately this was because they contained varying quantities of morphine and alcohol.

Next came teething powders, which were laced with a form of mercury called calomel. This resulted in babies getting even sicker. Because POISON.

Honestly, no wonder we think of teething as a terrible time. It was a time when babies where historically mistreated in the name of these supposed ‘teething remedies’.

Of course, teething treatments were not the only approach to easing the emergence of baby teeth. Teething toys have been around for centuries was well. Sometimes babies were given semi-precious stones, wolves’ teeth, snakes’ teeth, wood lice, donkey hair, plant roots, bone, ivory or coral either mounted on a silver handle or worn as an amulet around their neck or waist. This was thought to offer a kind of magical relief for teething bubs.

Which is all any parent wants when their baby is stroppy, really. Perhaps we should all be adorning our tots with belts of coral or animal teeth?! I think we’ll draw the line at a viper’s vertebrae necklace though.

Teething necklace of viper’s vertebrae, and wolf’s tooth for use during dentition. 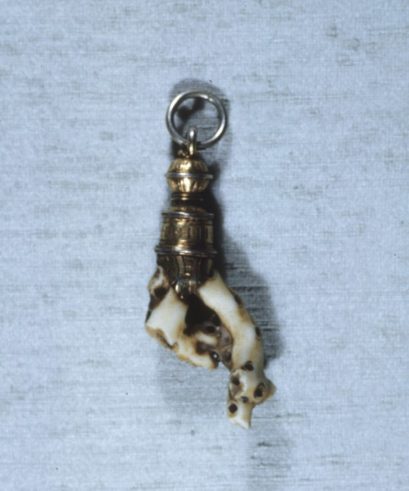 “Red coral from the Mediterranean was favored for teething pendants and other amulets worn by babies, because it was believed to drive away evil spirits. Many 15th-century paintings of the Christ Child show him wearing such an amulet. White coral was presumed to share some of these powers.” “In the 1900’s, during the Victorian era, when infant mortality rates were high, these rattles were regarded as extravagant christening gifts for teething, but they also took on the role of an amulet. The use of coral is significant as many cultures believe it to have medicinal and protective powers. Ancient Romans would hang coral pendants around children’s necks to keep them safe from danger, evil and illness.”
Source: Amanda Appleby Antiques