Hoping for a healthy baby is always at the top of the list for expecting parents – but sometimes, sadly, this is not what everyone is gifted with. New mum, Tara Ladd shares her baby boy, Ari’s incredible story of the first year of his life in the hope it encourages us all to think seriously about organ donation.

Wheels are in motion

Late one afternoon, in the peak of a pandemic, we received a phone call that would change our lives. “I’m calling from the liver transplantation department at RPA. We have a liver for Ari.”

Ari is my 11-month-old son and at three weeks of age we were assigned the extreme version of a first baby. It started with a trip to the GP for a suspected cold, but the doctor noticed that Ari’s belly looked a little yellow and ran a precautionary blood test. It became the beginning of something much more and Ari was about to face a first year that wasn’t in our baby books.

Within days Ari was in theatre at Westmead Children’s Hospital. They confirmed he had a rare condition called Biliary Atresia, which scars and blocks the bile ducts, damaging the liver. It occurs in about 1 in every 20,000 births and he underwent a Kasai procedure – an eight-hour open surgery which connected his small intestine to his liver to drain the bile. It is performed at Westmead about nine times a year and has an equal rate of long-term success, temporary success, and liver failure. Ari had no complications. His bile duct had not yet fully deteriorated, which meant they operated early enough, and this gave us hope that he’d be okay.

But three months later, Ari’s liver stopped clearing bile. Our baby, whose smile kept lighting up the room, had a liver that would not be expected to last two years. Plans began to prepare him for a liver transplant and our days were quickly filled with blood tests, meetings with surgeons, specialists, counsellors and social workers. The conversations around the risks and implications were confronting, including the Plan B which would result in me becoming a sudden living donor, but we clung to the success rates. Locked down for a liver

In March, while people were fighting over toilet paper, Ari’s placement on the transplant list was paused. He’d contracted two viruses and the excess fluid in his belly caused two hernias. He required another operation and, because of the COVID restrictions of a one-parent stay, we began alternating days and nights to be with him. His recovery brought relief to be active on the transplant list, but we also began the emotional journey of knowing that someone else needed to lose their loved one for our baby to live.

That day occurred smoother than we had dared imagine. In the middle of global chaos, our home that day was unusually prepared. Surgery was planned for 11.30am the next day, but we needed to get to hospital to prepare. It was Ari’s tenth hospital trip in his nine months.

The drive to the hospital was surreal. The dark roads were empty because of COVID, and I remember crying – for the opportunity that was now in front of us and the sadness I also felt for the donor and their family.

Could this be the beginning of a ‘normal life’?

Ari was the first liver transplant patient during COVID that wasn’t a living donor, so the protocol was uncertain on our arrival. The one-parent stay was still required, but given the seriousness of the situation, they allowed us both time with Ari before we said goodbye.

With already intense emotions, when the time came to take Ari into theatre, my heart was thumping out of my chest. After another hard goodbye with his dad, I carried Ari into the operating room. When he cried, all I could do was hold his hand, so I played him The Wiggles so that he fell asleep to sounds of happiness. I broke down into tears as I walked out. A nurse assured me that the surgeons were some of the best in the world, but I knew that. The tears were a release of everything that we had been through up until that point, and that this could be the beginning of a normal life. It was 11 excruciating hours later that we got the call to say that the surgery was a success and that Ari’s new liver was already working. In the middle of the night, as we watched his tubed and stapled little body breathe, our new life was slowly coming into focus.

We watched him come out of ICU after three days and the yellow start draining from his skin after four. We watched him sit up for the first time, unassisted, because, after five days, he didn’t have an inflamed liver and spleen. In three weeks, we were back at home. Weekly bloods monitored his progress, and each week he got healthier and cheekier. Being able to process food, Ari progressed from the 10th weight percentile to the 65th in just ten weeks. 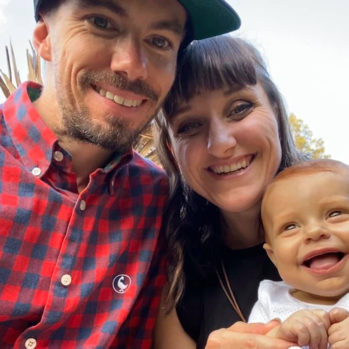 Ari is now immuno-suppressed for life. There will always be things we need to do, like mandatory hospital stays if his temperature goes over 38.5 degrees, or if there is a chicken pox outbreak, as he is unable to have live vaccinations. But his life has been saved. Our lives have been changed, and we can’t stop praising the support we received from the hospital and Leaping Livers, a charity event that helps raise money for the Paediatric Liver Transplant Unit. Without the aids they’d fundraised for, Ari would have experienced so much more discomfort and interference. And without their assurance at 3am, the hugs, the laughs and sincerity, the hospital accommodation, we would have crumbled too.

Ari’s first year had different milestones to others. Our first year as parents has not been the one we had imagined. But our baby has taught us what resilience looks like. Ari’s name means “Lion of God”. And what a brave little lion he is.

The staff at the Children’s Hospital deserve all the help they can get to support more families like ours. They are raising funds through a virtual July event called Leaping Livers Lapping the Lagoon. Visit www.leapinglivers.org.au to find out more.

If you haven’t already, register and talk to your family about organ donation, because it’s kids like Ari that are waiting on the other side.