Tennis champion Serena Williams and fiancé Reddit co-founder Alexis Ohanian welcomed their baby girl two weeks ago, and after a shaky start they’re ready to introduce her to the world – via an adorable video!

Meet Alexis Olympia Ohanian Jr. You have to check out link in bio for her amazing journey. Also check out my IG stories ??❤️❤️ 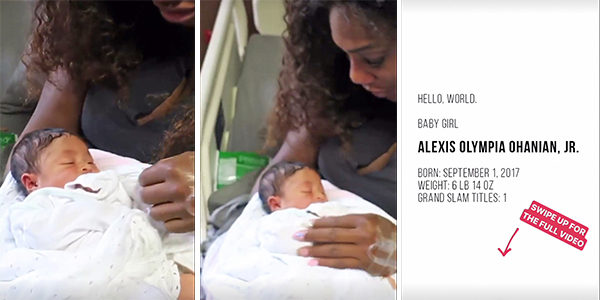 “Meet Alexis Olympia Ohanian Jr,” Serena posted alongside a sweet Instagram pic of herself and baby Alexis (who is obviously named for her dad).

Serena then directed fans over to her website, where an equally adorable video tracking her pregnancy and Alexis’ arrival awaits.

The video begins in the doctor’s office with footage of Serena’s ultrasound and the super teeny-tiny baby’s thumping heartbeat.

It’s all pretty cute and very relatable – and kind of normal, dare we say?!

“A lot of complications”

At the end of the snippet-filled clip, baby Alexis makes her debut snuggled up in her mum’s arms.

Serena’s still hooked up to an IV drip and reveals that it’s not been plain sailing, but they’re totally thrilled with their new bub.

“So we’re leaving the hospital after six, seven days. It’s been a long time, but we had a lot of complications, but look who we got — we got a baby girl!”

Just a few days after announcing I was pregnant, we did this shoot for the @voguemagazine iconic September issue. I was so energetic that day but then I remember being totally exhausted and needed to take a break for an hour. I was still trying to understand this whole pregnancy process. Nowadays I have no ankles or toes and my fingers resemble sausages but it's moments like this that are captured by @mariotestino that makes everything worthwhile. Dress by my love @donatella_versace

Serena had been aiming to defend her Australian Open title in January 2018. It’s unclear whether this unexpected “complication” setback will impact a return she’d already described as “outrageous”.

“It’s the most outrageous plan. I just want to put that out there. That’s, like, three months after I give birth. I’m not walking anything back, but I’m just saying it’s pretty intense. In this game you can go dark fast. If I lose, and I lose again, it’s like, she’s done. Especially since I’m not 20 years old. I’ll tell you this much: I won’t win less. Either I win, or I don’t play.”

We suspect that she’ll push through and do her level best to hold onto her title.

Welcome, Alexis Olympia Ohanian, Jr., we're so happy to meet you. We made you a video of our adventure together so far (see bio). Our little girl is already mama's perfect sidekick.