If you’ve just been shopping for your baby, or been the recipient of some wonderful baby shower gifts, you might have wondered, ‘where did this whole ‘pink is for girls’ and ‘blue is for boys’ thing come from, anyway’?

Up until the 1940s, the pink and blue stereotype many people now subscribe to for indicating the sex of their babies was viewed entirely differently.

For starters, most babies used to be dressed all in white. Both baby boys and baby girls were simply thought of as ‘babies’ – which is to say, gender-free, and were originally dressed in practical white (because it stood up to lots of soap, soaking and old-fashioned washing methods.) And both boys and girls wore dresses.

Once the 1940s rolled around, things began to shift. Both electricity and washing machines became more accessible, and those whites gave way to more easily laundered colours. Many parents thought their bouncing baby boys looked better in pink, while girls were encouraged to wear delicate blue. The Smithsonian reports that between 1900 and 1930, “The generally accepted rule [was] pink for the boys, and blue for the girls.”

“The reason is that pink, being a more decided and stronger colour, is more suitable for the boy, while blue, which is more delicate and dainty, is prettier for the girl,” The Smithsonian continued, quoting the 1918 publication Earnshaw’s Infants’ Department.

By 1927 the pink/blue boundaries were blurring a little, and there was conjecture over which sex looked better in which colour. The chart below was published in Time Magazine to show which US stores promoted blue for boys and pink for girls. Or vice versa. Some babies wore whatever colour looked nicest with their eye, hair colour and complexion. Their sex didn’t even come into it. Nice!

Eventually though, by the 1940s, it was ‘decided’ that blue was indeed for boys and pink for girls. Thus boys and girls began to be dressed more uniformly in those colours to denote their sex. 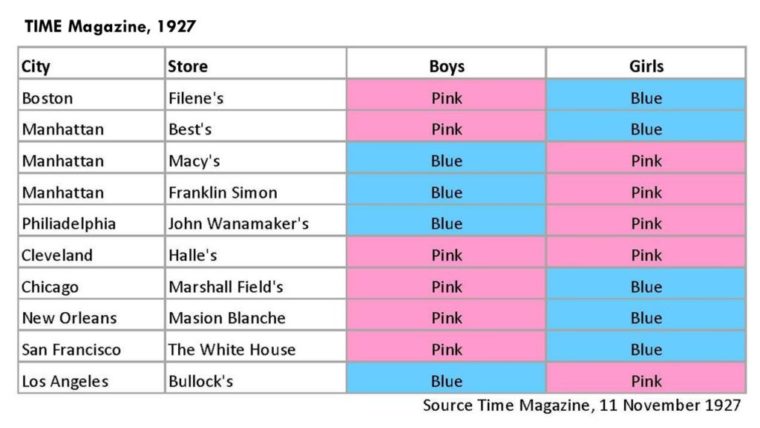 Jo B Paoletti wrote a book about this boy/girl colour divide. In Pink and Blue: Telling the Boys from the Girls in America, she investigates the influences behind the pink and blue trend. She’s appeared on the Gender Reveals episode of podcast Decoder Ring to speak about her findings.

Jo says that attitudes towards the colours babies and children wore were always a little mixed up. They began to shift to blue and pink in the 20th century for surprising and misguided reasons.

She told Decoder Ring that before this, gender-specific clothing was considered inappropriate because it might make children aware of their sexuality from a very early age.

Then things shifted from gender-neutral to gender-specific, mostly because it was thought that boys should be masculine, wear different colours to girls (hello blue!) and mimic their fathers from an early age … to ‘prevent homosexuality’.

Of course, everything about that approach is ridiculous. Freud is mostly to blame, Jo says.

In the late ’60s and ’70s, feminism and a push for equality were on the rise and baby identity ideas were shaken up again. Some babies began to be dressed in unisex clothing as parents moved away from the pink and blue stereotype.

Fast forward to the 1980s when advances in reproductive technology meant that — for the first time — doctors could determine a baby’s sex before they were born.

To celebrate this development, the pendulum swung back to pink and blue, as parents sought to celebrate their newfound ability to share their growing baby’s sex.

Many parents decided that colour could denote identity once again.

It was not just parents who were excited. Savvy marketers soon realised that manufacturing and pushing ‘pink for girls’ and ‘blue for boys’ products would mean families might buy a second set of nursery equipment. Ka-Ching!

And thus we’re back to the construct where colour could denote a baby’s identity as early as three months into a pregnancy.

Now, as we enter a new decade, pink and blue gender reveal parties are hugely popular – and getting increasingly elaborate.

While the accidental inventor of these gender reveal announcements now rejects this new tradition and the way it labels children even before they are born, lots of parents love having the opportunity to have a party long before a baby shower rolls around. 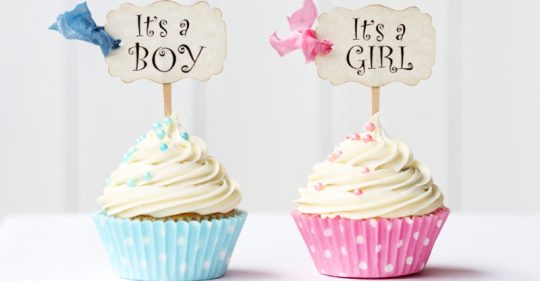 And, despite the fact that your toddler might say she prefers pink, it turns out girls are actually no more attracted to the colour pink than baby boys.

A 2011 study found that “when one-year-old girls and boys were shown pairs of identical objects such as bracelets, pillboxes and picture frames, but with one object pink and another of a second colour, they were no more likely to choose pink than any other colour,” the BBC reports.

Once kids hit the age of two and become more aware of gender norms, girls begin to prefer pink and boys gravitate to blue. But if they’re not made aware, they don’t. Which is good news for parents — and gift givers.