Sterilising baby bottles is a hefty and time-consuming task, what with boiling pots of water and making sure you have enough bottles to get through the day.

However, Melbourne mum Shannon Gilleland has created an innovative self-cleaning bottle that is set to revolutionise the lives of parents’ around the world.

Shannon is currently crowdfunding through Indiegogo to bring this too-good-to-be-true bottle to life.

Turning to the latest ultraviolet lightwave technology (UVC), Shannon created the Pronto Bottle, a bottle that sterilises itself while you’re on the go. Meaning there’s no need to wash multiple bottles or boil water to fill them up before you go out.

The mum came up with the idea while juggling the bottle prepping process in the back of her car, while parked outside her husband’s workplace one day.

“I thought to myself that if someone were looking into the back seat, they would surely have laughed at how ridiculous the process of preparing a baby bottle was while on the go.”

Shannon did her research and found that parents currently spend around an hour a day preparing and sterilising baby bottles until their child is at least 12 months old.

“I surveyed 100 parents, and they all seemed to be struggling with the steriliser, boiling water or having to carry around heavy pre-filled bottles process too,” she says.

Not so new technology

After looking at traditional methods of baby bottle preparation (steam sterilisers, sanitising tablets and liquids), Shannon turned to the medical industry where UVC was already being used to sanitise surgical equipment.

She also learned that UVC destroys harmful microorganisms found in food and the air – and that it is used by hikers and third world aid workers to sanitise drinking water in remote areas.

“That’s when I had my light bulb moment, and knew it was going to be possible,” said Shannon.

So, how does the bottle work?

The Pronto Bottle has a UVC light concealed in its lid to self-sterilise the bottle, but also water from any tap. So bottles can be rinsed and plonked in the baby bag ready for use.

Once filled with water, all you have to do is press a button to activate the UVC, give it a shake and it’s ready for formula. Alternatively, the bottle can be emptied after it sterilises itself and breastmilk can be added.

This ingenious bottle also includes a cut-off safety switch that will turn the UVC light off if it detects that it is not correctly attached to the bottle.

The Pronto Bottle made glass and recyclable materials, making a more sustainable and cost-effective choice compared to traditional baby bottles; it can be re-used for subsequent children in the family, unlike plastic ones that need to be replaced. 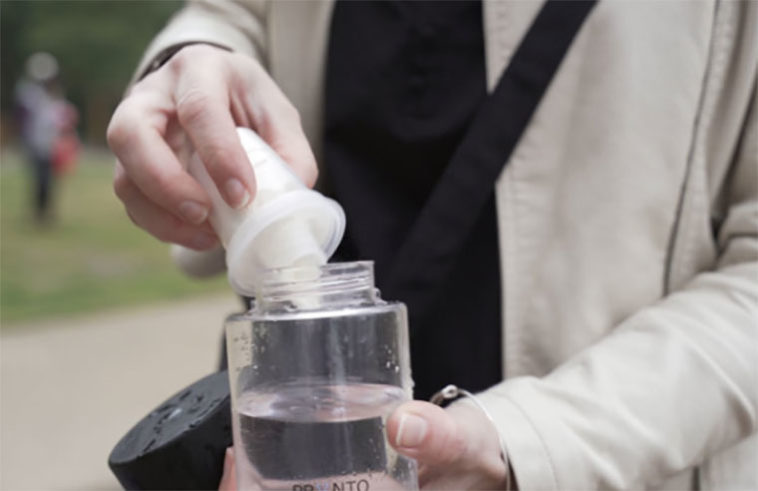 The journey of an idea

The Pronto Bottle took 18 months to develop, but the road to production hasn’t been easy for Shannon. The mum started her own business, Form-I-Baby, while battling post-natal depression after the birth of her now almost three-year-old daughter.

“The voice of self-doubt got very loud at times, and it was honestly a combination of things that helped me through including my wonderful husband, family and business mentors,” she said.

The bottle is available for purchase via a crowdfunding campaign and is expected to be on sale to the general public mid next year. So not too long of a wait for something that sounds life-changing.

“I’m so happy that my product is going to make a difference to the lives of mums and dads around the world,” says Shannon.

“I don’t know anyone who is happy to wake up to a sink full of dirty baby bottles in the morning or enjoys lugging around a ridiculously large nappy bag with them if they’re just nipping down to the shops for 2 minutes.”