We love digging up stories about the history of parenting, and this one is an especially excellent one.

A new study released this week has shared some interesting information about how babies were fed in prehistoric times.

Buried with their bottles

Various different pottery vessels were found in the graves of prehistoric children in Bavaria, Germany.

When tested they were found to contain animal milk – from creatures like sheep, cows and goats – and possibly human milk too.

Researchers suggest that this is a sign that perhaps ancient mums used to express milk for later, just like their modern counterparts.

The vessels were made in various shapes, with some taking the form of mythical animals, which seems like a brilliant idea.

As tested by modern babies

Vessels like the ones found in Bavaria have been discovered at other sites and were initially thought to be for feeding sickly people. But these new finds have scientists revising that theory, and they’re pretty sure that they’re used for feeding babies instead.

They even tested a model of one on an actual modern baby.

“When we gave a reconstructed one to [a colleague’s baby] Noah, it’s very intuitive, so it fit just perfectly within a baby’s cupped hands. And he loved it,” the paper’s lead author, archaeologist Julie Dunne of the University of Bristol told NPR.

The beginning of farming

When humans began to farm their food and domesticate animals, it’s thought that they realised they could feed their babies animal milk too.

“This is the first time that we’ve been able to identify the types of foods fed to prehistoric babies,” Julie explains.

It looks like they also identified the beginning of bottle feeding.

These findings may also indicate that mothers may have begun weaning their babies earlier, and their reproductive cycle sped up a bit.

That is, they were having babies more quickly because they didn’t have to breastfeed an infant for as long. Instead, they were able to give their babies a bit of goat’s milk in a sort of mythical monster cup and pop off for a ‘snuggle’ with dad. Woot-woo. 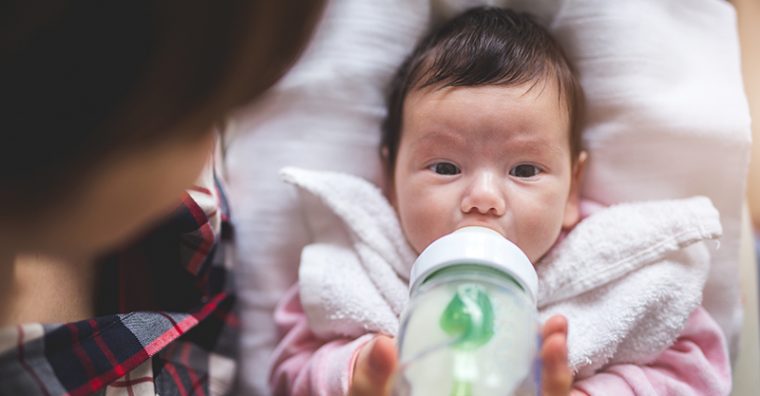 There was a baby boom as farming became more popular. And the babies were drinking milk from cows and goats and the like, often being weaned much sooner. It all seems kind of okay until you remember that life was very different then.

There was no intel about keeping things sterile for vulnerable babies and no advice on optimal nutrition either.

Turns out pottery monster cups are not very hygienic. Also? Animal milk introduced too early can have a detrimental effect on infant health. Damn.

It’s likely that babies got sick very often, and even died. Which makes the fact that they were buried with these ancient feeding vessels even more poignant. Sob. And also interesting. Sigh.