Here’s a mum-to-mum guide on the ins and outs of this popular baby feeding approach – and some ideas on what to do if your bub doesn’t fancy finger foods.

My kitchen resembles one of Melbourne’s busy cafes during the breakfast rush: Eggs are boiling on the stove; avocado is being sliced, toast browned, while fresh berries are rinsed and lovingly patted dry.

Meanwhile, my infant son watches on from his highchair, voicing his displeasure over the wait time for food. “Thank goodness he can’t leave a negative review on Google”, I think to myself. Presently, I serve his morning meal, laid out in a fashion worthy of a Michelin star, and eagerly await his reaction. He looks down at his finger food, and looks back up at me, quizzically. Not what I was hoping for.

Some of the food, (much less than I would like), makes it to his mouth – briefly –but most ends up on the floor. The strange thing is, he seems to put everything else straight in his mouth – toys, books, and peoples’ glasses that he deftly swipes from their faces if they get too close.

Yet he appears to be completely disinterested in oral exploration when it comes to food. Welcome to the world of baby-led weaning. 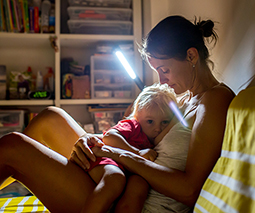 Baby-led huh? What’s it all about?

Traditionally, infants have been weaned onto solid foods by being spoon-fed purées by their carers.

Baby-led weaning – let’s call it BLW from hereon in – forgoes the spoon entirely, and involves offering infants small, easily manageable pieces of age-appropriate soft solids that they can feed themselves (under supervision, of course).

BLW was popularised in the early noughties, after being coined by Gill Rapley and Tracey Murkett, authors of Baby-Led Weaning: The Essential Guide to Introducing Solid Foods.

Fifteen years later, there are a myriad of books, websites and online forums touting the benefits of BLW, which purportedly include improved dexterity, early oral-motor skill development, improved self-regulation and lower rates of obesity later in childhood. It has even been suggested that BLW makes for less fussy eaters. Some parents also report that it’s faster to prepare and serve what is essentially finger food, compared to cooking, puréeing, and spoon-feeding bub, one painstaking mouthful at a time.

On the other hand, BLW is not without its downsides, most notably an increased risk of choking. For this reason, parents are advised to only offer soft, age-appropriate foods and avoid hard foods such as raw fruit and nuts. Concerns have also been raised as to whether a BLW diet provides adequate nutrients and enough energy to meet the requirements of growing infants. Back in the kitchen, my son seems to have missed the memo about the upsides of BLW. Like any modern mother, I look for answers online. My search reveals that while BLW continues to surge in popularity, there is very little scientific research proving this method is beneficial to a baby’s development.

A 2017 paper published in Current Nutrition Reports, entitled Baby-Led Weaning: The Evidence to Date stated, “although there is limited evidence suggesting that a baby led approach may encourage positive outcomes, limitations of the data leave these conclusions weak.”

The paper went on to conclude, “Further research is needed, particularly to understand the impact of this approach in different contexts and populations.” Around his seventh month, my baby began to demand to breastfeed more frequently. It became apparent I needed to get more food into him, to support another growth spurt.

Having had such an inauspicious start to solids, I chose to do away with an exclusive BLW diet and instead kept him on puréed and mashed foods, while also offering finger foods that he could leave, discard, or (occasionally) nibble on, as he saw fit.

While this was creating even more work with respect to food preparation, it was worth it to relieve the anxiety I was feeling around how little he was consuming using BLW alone. I could rest easy knowing he was getting a healthy amount of carbohydrates, fats and proteins from his purées, and viewed anything else that he decided to sample by way of finger foods as a bonus.

As the name implies, the point of baby-led weaning is to be conscious of, and responsive to, bub’s preferences when it comes to diet. In my case, bub led me away from BLW. Yours may be different.

Some infants will show a keen interest in feeding themselves, and if they seem to be satiated with BLW alone, then this may be the way to go. However, if you’re adhering to advice simply because it seems to be the most popular method of the day, sometimes it’s better to trust your mother’s intuition and do what’s right for your baby.

In my case, sadly, this seems to mean getting up that little bit earlier to prepare purées – which my boy absolutely loves – to accompany his finger food. At the end of the day, my little café only has one customer, so I really need that five star review!