Tana and Gordon Ramsay welcomed their fifth child back in April and baby Oscar appears to be hitting his milestones brilliantly (but perhaps a titch reluctantly at times!)

Case in point is the little guy’s first foray into finger foods. Mum Tana videoed her bub taking his first mouthfuls of solid snacks and it’s honestly hard to know whether he’s on board with this development.

“Ph too adorable! Doing the exact same for my 7 month old at the mo,” fellow famous chef Rachel Khoo commented under the video.

“Oscar will go on to be a very prominent food critic,” someone else predicted. 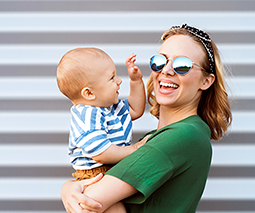 “Unmistakably a Ramsay baby!” one fan declared and they’re not wrong.

“I put Ed on then I blacked out”

Clearly Gordon and Tana are now veteran parents – Oscar’s siblings are 21-year-old Megan, 19-year-old twins Holly and Jack, and 17-year-old Matilda – but the celebrity chef revealed dad life is still a steep learning curve. Best laid plans for Oscar’s birth were hit by a dose of reality (and a dose of Ed Sheeran!)

“I was there and I absolutely sh*t my pants. I fainted. I literally dropped on the floor. I was sat there and Oscar popped out through the sunroof and then they sort of throw you on him and he’s screaming and I fell back, the nurse grabbed me,” Gordon admitted, recounting Oscar’s birth on The Jonathan Ross Show.

“Ed Sheeran was playing, I put Ed on to calm everybody. I put Ed on then I blacked out, I fainted like an idiot. Have you ever been in the [operating] theatre where there is so much commotion, so much going on? And then bang. I’ve never fainted in my life, by the way, that was the first time.”

Speaking about his newest arrival recently, Gordon admitted the tiny boy is the light of the family’s life.

“He is six months, it’s extraordinary, also for the rest of the kids it’s just a welcome bundle of joy.”