Babies have to be one of the most photographed subjects on Instagram, along with latte art, boutique flat lays and #shelfies. So why is this fairly unremarkable photo of a mum cuddling and feeding her bub causing a stir?

Australian ‘Instafamous’ blogger and mum-of-two, Siobhan Rennie, is known and loved for her down-to-earth, ‘real talk’ about motherhood. She waded into the bottle vs breast debate with a post on her Instagram account. But what makes Siobhan’s photo different to the millions of other baby photos on Instagram, is that it cuts through the #brelfie noise with startling simplicity.

I still feel guilty every day that I'm not breastfeeding Aoife anymore. Because mum guilt is a HUGE BITCH. I had my reasons for stopping. So many reasons (she took hours to B'feed, it wasn't fair on Harry, so many latching probs meant too much air then too much wind and reflux, ohh and my PND and anxiety…). At 4 months we called it quits and it was such a painful decision. Life definitely got easier, we were all a lot happier. But I still, 8 months on, think I gave up too easily. I didn't, I know that, but I still can't help being really hard on myself… Add to that the stare I got from a woman today at the park when I pulled out Aoife's bottle… Jesus, it was SO judgey. The thing is, FED is best. Aoife was (and still is) more satisfied on the bottle. It doesn't matter how we feed our babies, as long as it's safe and they're nourished and happy. Never doubt your choices, you have to do what's right for you and your whole family – whether that be breastfeeding until they're toddlers or never being able to even start. And tell mum guilt to just F OFF ?? [PS I've found the comfiest 'I don't have to change bras before leaving the house' wire free bra that actually holds me up properly – prior to finding these I was still wearing my old grotty maternity bras around ? ?#sohotrightnow Thanks @bfreeaustralia ??] #fedisbest #bottlefeeding #uniteinmotherhood #nofiltermum

Siobhan talks about the guilt she feels every time she bottle feeds her 13-month-old daughter, Aoife, but instead of just leaving it there, she goes on to speak openly about the complexities behind a mother’s choice to bottle feed.

“I had my reasons for stopping [breastfeeding]. So many reasons,” Siobhan states, mentioning struggles with postnatal depression and anxiety, extensive time spent feeding her daughter which took time away from her son and latching problems causing wind and reflux.

“At 4 months we called it quits and it was such a painful decision,” she writes. “Life definitely got easier, we were all a lot happier. But I still, 8 months on, think I gave up too easily. I didn’t, I know that, but I still can’t help being really hard on myself.” 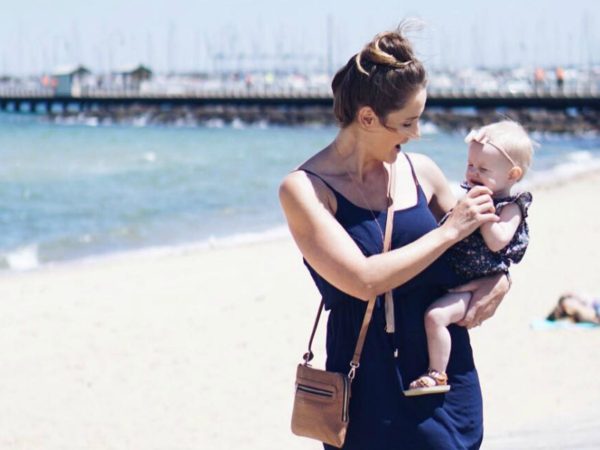 Siobhan with her 13-month-old daughter, Aoife.

While we are told time and time again by health professionals that “breast is best” and the #brelfie photo sharing movement is normalising public breastfeeding, the reality is for a variety of reasons (not often discussed when “breast is best” is promoted), mothers can’t always begin or continue breastfeeding, even though they want to.

Often the breast vs bottle debate is over-simplified, and it can seem like breastfeeding mothers are holier-than-thou and the bottle feeding mothers are defensive and bitter. But, as Siobhan shares, the disappointment that comes with not being able to breastfeed – as many mothers hope to – is a very difficult emotion that’s not acknowledged enough. Starting a conversation around these feelings of mother guilt is really helpful, because guilt (whether self-imposed or from the judgement of others) is a vicious beast that affects all mothers, for various reasons, breastfeeding or not.

From Siobhan’s story and many other mums like her, it’s clear that while breast may be nutritionally best, it’s not always the best option for the mother’s physical, emotional and mental health. Every mother’s circumstances are different.

So instead of saying ‘breast is best’, maybe we should just say ‘breast is breast’. It’s great if you can do it, but it’s not the be all and end all.