Not many men find out about a pregnancy before their wives. Tim Brummel is one of the few, and his video of the reveal has gone viral.

Early this year, Tim Brummel had a vasectomy. He and his wife Rachel have three boys, and their family was complete. In July, Tim noticed behaviour in Rachel that was distinctly familiar, and he began to suspect his vasectomy had failed.

He said Rachel was acting, “a little bit pregnant. She was tired a lot, a little bit more hungry than normal, a bit nauseous. We joked about it, but we knew: she couldn’t be pregnant.”

Tim called his doctor, who confirmed his suspicions. The vasectomy wasn’t successful, and the office had forgotten to ring him.

Instead of telling Rachel the news right away he decided to surprise her. Tim told People magazine, “How many guys get the chance to tell their wife she is pregnant? I wanted to surprise her!”

To confirm the pregnancy, Tim put his plumbing skills to work. He turned off the water to the toilet so it would be empty, and then he waited. Knowing pregnant women, he didn’t have to wait long before there was a sample to test. The test confirmed the pregnancy, and Tim planned his announcement. 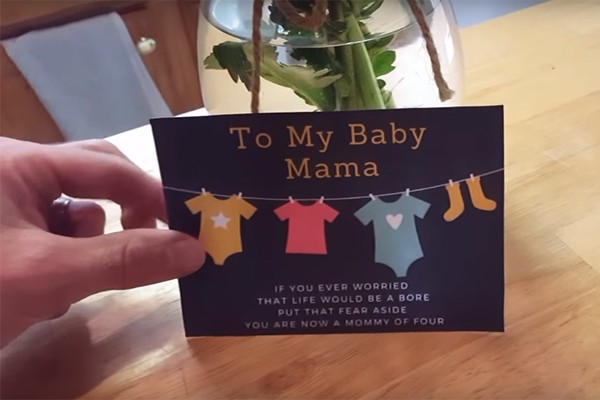 He bought flowers and made a card that said, “To my baby mama. If you ever worried that life would be a bore, put that fear aside. You are now a mommy of four.”

After she dries her tears and hugs her husband, Tim makes his wife a co-conspirator, hatching a plan to surprise the rest of their family. He tells Rachel they won’t tell anyone until she takes a Harmony test to find out the gender. After that, they’ll post the video online and let the internet do its work. She agrees, and the video documents the journey from that moment until they reveal the gender of the baby to their three little boys.

And what are they having? Another boy, much to the disappointment of their eldest son, who desperately wanted a little sister.