Birthdays are big in our house. Bigger than Ben Hur. Both my children have a party each year and despite my rule that we don’t even talk about it until the month before, the planning literally starts 12 months in advance. It’s very much a family affair and we all have our jobs leading up to the big day. My numerous tasks include such things as shopping in the supermarket party aisle, organising food platters, being the RSVP contact and writing the treasure hunt clues. However, my main area of expertise has become the birthday cake.

Not that I’m particularly talented at cake-making. In fact, I would say cooking desserts of any kind is definitely a challenge for me. So when it comes to cake, I do vanilla or chocolate and that’s about it. However, creating fun birthday cakes to wow the kids has become one of my greatest pleasures. Some are memorable, some are just average, but they’re all easily achievable. And at the end of the day, it doesn’t really matter what the cake looks like, but it’s always a hit with the party guests.

This was one of my very early cakes, and one of the most popular. I made it for my daughter’s fourth birthday and again when my second daughter turned four. People were impressed by this cake, even though one of the wafer windows had fallen off. It looks difficult, but surprisingly, it’s not at all, especially after watching someone else explain it all on YouTube … 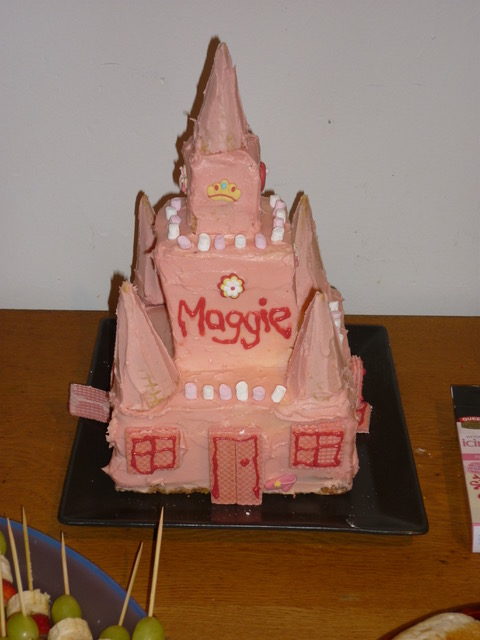 This one of my greatest triumphs – the movie popcorn! I couldn’t manage the Hermione cake that was requested, so my daughter had to make do with Hedwig. But it did come with broomstick lolly bags made out of brown paper bags with sticks, all tied up with string. I wish I could say that I thought of it but this was another clever concept sourced off the internet. We were all set to have a mermaid party but when the big day arrived, my daughter decided she didn’t want to wear the mermaid costume anymore. I think she put on Tinkerbell pyjamas instead. But at least the cake was still appropriate for the party’s theme … 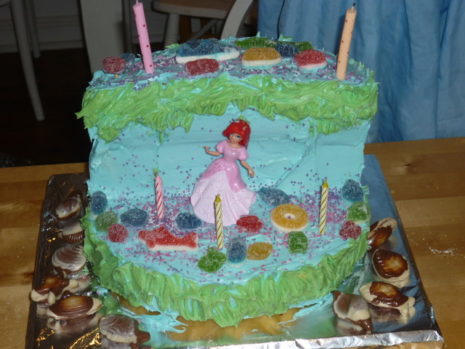 This was a third birthday cake for my second daughter. Very simple, but I think we were renovating at the time, so quite frankly, anything was an achievement This is my most recent cake, made only last week for my daughter’s eighth birthday. I was inspired by the gorgeous unicorn cake on the Babyology website. You can actually buy a kit through Bake Believe, which would probably be a lot less stressful, and, no doubt, produce a better result. Still, I got there in the end – despite the fact that the rainbow sour straps were the real hit of the day. And the next one?

I’m not sure what the next cake will be, but I have a short break now until December, so plenty of time to think about it. However, party plans are well and truly underway so I’d better get on with it.