Goodness me. When it comes to messed-up baking efforts, this one takes the cake!

Mum Melin Jones can see the light side of her daughter’s birthday cake fail now, but at the time she says she was pretty cross.

Her daughter Liz was turning two and she ordered a cake for the little girl – whose nickname is ‘Lizard’ – from her local Walmart.

Liz says she asked the lady to write ‘Happy Birthday Lizard’ on the top of the cake when she ordered it.

What happened next was that Melin went to pick up the cake from Walmart. Perhaps she was in a rush but she simply paid the money owed and popped it in the car.

It was only when she got home that she took a peek. One small step: 7 brilliant ideas for an out-of-this-world space-themed party 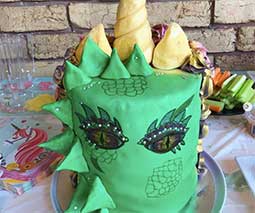 Two for one: The new birthday cake trend taking over our feeds

“As I’m unloading the car I look quickly at it and notice the lady didn’t hear ‘Lizard’ she heard ‘Loser.'”

Gasp. It looks like Melin eventually concealed the message as best she could under extra layers of icing, but not before taking a couple of now-viral photos to record Lizard’s response to her birthday cake.

“Here’s my baby and her loser cake,” Melin wrote, sharing the images on Facebook. “It’s funny now but I was maddddd.”

“We paid for a new cake,” the good-humoured mum wrote in a later update, addressing people’s worries about Lizard’s mean cake.

There are no hard feelings, she also noted, because Melin figured the onus was on her to make sure the cake was right before she left the store.

“It was my fault for not checking it when it was handed to me and not the lady who heard me wrong. We made sure to just use her name on the second cake.” Melin said, “It was only fitting to get her a new cake that said ‘You’re a winner’. Apparently, judging by her facial expressions once again, the childhood damage is done,” Melin joked.

“She ate every bit of her cake, she got some cheesy roll ups (her favourite from Taco Bell ) and got a new pair of shorts. Safe to say she has had a pretty great day and it’s not even noon yet.”