A mum turned to our community of helpful parents to ask for advice about her little boy. He – like many toddlers who have gone before him – feels most comfortable when he’s wearing … no clothes. Now as cute as that can be at home, it’s not really practical in cold weather. And if you’re leaving the house, well, clothes are a non-negotiable.

This frustrated mum wants to know how to encourage him to stop the nudie runs.

#HELP! My toddler (18 months) won’t keep his clothes on! As a baby, he started taking his clothes off just as soon as he learnt how – he can get out of everything, including his nappy. I am spending more and more time negotiating with him about putting clothes on (and keeping them on), and it is becoming a big issue between us. I am often running around trying to squeeze him into clothing just so we can get out the door. And then when we’re out, he’ll start to try to sneakily strip off … what should I do?

Our readers had some really helpful advice. Here’s what they had to say:

The choice is yours

Some readers thought that providing a little bit of choice might go a long way when it comes to getting dressed.

Toddlers are very independent and often strong willed. They are, however, very young. They need to feel empowered to make choices. So give him two choices of clothes to wear from his wardrobe. But just 2 choices. And once he’s chosen one, that’s what he wears. – Karina Carmona

Do you think he might be more keen to wear clothes if you took him clothes shopping and let him choose some clothes. If you could say, do you want to wear those lovely trousers you chose the other day maybe he would be tempted. – Carolyn Sorbie 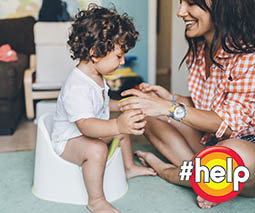 Other clever mums said that they’d solved this problem with their own kids by letting them wear costumes, instead of the usual toddler outfits.

Have you tried costumes? Superheroes, doctors, construction. My little boy started wearing these early and hated wearing anything else. You could negotiate for underwear and let him pick a costume for the day. – Rebecca Swan

I’ve found my boy won’t take off anything that’s Spiderman colours. He is so in love with the spidey idea that I can say anything is a Spiderman shirt or socks and he will wear it happily sometimes for two days straight without removing it. – Leesa Swain More to the story?

Quite a few parents wondered if there was some discomfort playing into this little boy’s penchant for nude.

Some children have sensory issues to clothing and the cloth or tags rubbing on their skin are extremely uncomfortable to them. – Teighlor Fiddler

This could be a sensory issue. Try a different washing powder or better yet soapnuts. Try different fabrics and styles of clothes. They might not like the feel/texture, scent or tightness/looseness. – Belle Johnstone