Georgie Dent is a successful writer, finance expert and mum of three. Her world fell apart and she spent two weeks in a psychiatric ward.

Her book, Breaking Badly, how I worried myself sick, tells that story, and in this interview, Georgie shares how hitting rock bottom helped her break the cycle of negative thinking that led her there in the first place.

This is an edited excerpt from Georgie Dent’s interview with Shevonne Hunt on Feed Play Love.

I fell over one night at work with these crazy vertigo attacks. If someone had said to me that an earthquake had hit, I would have believed them. I felt really uneasy. I felt dizzy and a little bit nauseous. So they took me downstairs and put me in a taxi and I went home to the apartment that my husband Nick and I were sharing. He was in Canberra that night. I went to sleep, sort of thinking, “Great, I’ll wake up in the morning and I’ll be fine.”

I wasn’t fine. I couldn’t actually get to work the next day, which was a really big thing for me because I persevered a lot. There were a lot of days where I was well within the bounds of humanity to have a sick day and I didn’t. But on this particular day, I was so dizzy that I couldn’t. And basically, that was the beginning of four months where I was dizzy all the time.

My balance was off, so I couldn’t easily walk around. I couldn’t live independently anymore. I initially saw an ENT and he said, “I think you need a week off; you need to take a break.” So I took a break. I took a week off work and I flew home to mum and dad’s place. It was almost the most stressful week of my life because I was like, “Stop stressing, you have got to stop stressing.” Mum and dad were going off to work and I was like, “Right, they’re going to work and I’ve got to de-stress.” And I couldn’t de-stress. Unsurprisingly I didn’t end up feeling better.

I went back to Sydney and started back at work, and then it just unravelled and I ended up having to take an extended period of unpaid leave from work. I moved back home with mum and dad because basically, I needed a carer. Mum took carer’s leave from her job and took on the very thankless demanding job of becoming my carer, and I was ultimately at their place for about three months, mainly on their couch, mainly sobbing or yelling at her. And you know, she had said to me on a number of occasions, well before this point, that perhaps maybe anxiety was something we should talk about. And I was furious at the suggestion.

Eventually, I went and saw this physician and he looked at me and he said, “Georgie, I’m so sorry for what you’re going through, this is awful.” And it was the most validating thing a doctor has ever said to me, and it made me cry. He just said to me, “Look, in my medical career that’s spanned almost 50 years, whenever I’ve got a patient with unexplained physical symptoms, it is always stress.” He said, “I’m not saying what you’re experiencing isn’t real because it is. But when I’ve got a patient with diabetes and there’s a spike and we can’t explain it, it’s always stress and we have to deal with that.” And that was ultimately the turning point.

At that point in time, my mental health had really deteriorated. I mean, I was highly anxious and frazzled, to begin with, but by this stage in the journey, I was really depressed as well because I was terrified. I genuinely thought I was going to spend the rest of my life on my parents’ couch. 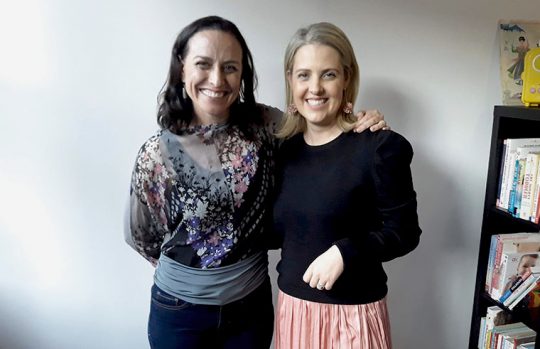 Georgie Dent’s book, Breaking Badly, how I worried myself sick, is available online and in stores now.