When you become a parent it can feel like you’re a tourist in a foreign country, where you don’t speak the language and Google Maps isn’t available. So when everyone starts clamouring on about “the routine”, you’ll be forgiven for thinking, “Huh?!”

Without question, so much of the early days with a newborn are about survival. Surviving on little sleep, surviving on only one coffee a day when 10 cups would be preferable, surviving the dreaded witching hour, surviving seven hours trapped under your tiny human during a cluster feed.

While the first month with my newborn son was by all accounts a little easier than most – we actually dodged the witching hour curse and I had a lot of family support – when I encountered tricky moments, hours or days, my mum would assure me it would get easier, especially when “you find your own routine”.

As someone who can be stubbornly proud and somewhat of a ‘Type A’ personality, I was a little ashamed to confess that I didn’t really know what the ‘routine’ she was referring to was all about.

What constitutes a routine? How would I find it? And how would I know when it was in place? Would my maternal and child health nurse/husband/friendly neighbourhood baby whisperer let me know what the routine was?

My mum seemed to infer that I would set this routine. But given my laughingly meagre experience with babies (do two fur babies count?!) I simply had no idea how to get one established. So … what’s a routine then?

I was told that establishing a routine gives babies a sense of security and stability. And that as my son got older, a routine would help in his social, emotional and cognitive development.

The government-funded online parenting resource, Raising Children Network, advises that while “it helps to be flexible about when your baby sleeps and feeds … many infant health experts believe that it can also help to begin doing things in a similar order each day – feed, play, sleep.”

Their instructions are that after your baby wakes, offer a feed, change your bub’s nappy, have “play” time, and then put them down for a nap when you notice their tired signs (usually after  60-90 minutes for a newborn).

Okay, right, so, a routine? Trouble was, this didn’t really seem to be a routine my son had any interest in.

In those first few weeks, it was more a case of fly by the seat of your pants. While the witching hour wasn’t really my son’s thing, cluster feeds were. So when you’re stuck on the couch breastfeeding from 3pm until 10pm, establishing the whole “feed, play, sleep” routine seems counterintuitive.

My mum tried to guide me towards spacing out feeds and sleeps in carefully timed increments, but given I had chosen to demand feed (basically what it sounds likes – feeding your baby whenever he or she demands it) this didn’t really wash with my seemingly ravenous bub.

I also found watching out for those tired signs – the indication that my baby was ready for another nap – incredibly tricky. Was he pulling on his ear because he was tired or just having a scratch? Was that a yawn or wind? Was he blankly staring because it was snooze time or because he was trying to figure out who all those visitors were peering down at him? This meant I more often than not missed that all-important ‘sleep window’. 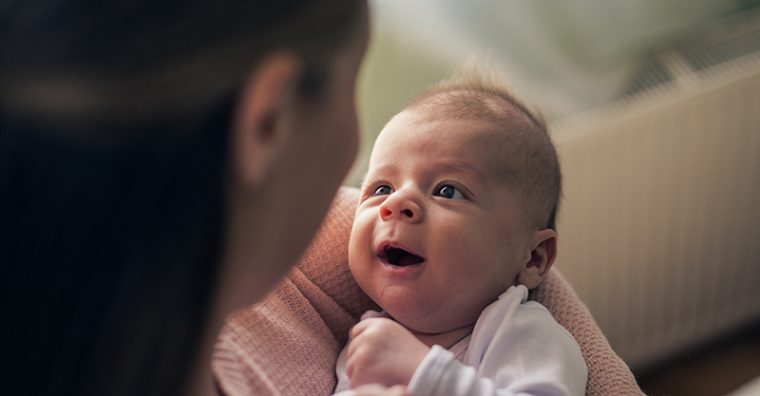 It all starts to make sense

After a couple of months though, I suddenly realised that our days had started to take on a kind of calm rhythm. A routine, if you will.

Somewhat fanatically I had started to keep track of my son’s every sleep and feed in an app, and when I looked back over the proceeding week or so, I could start to see somewhat of a pattern emerging.

I was also starting to get some nice long stretches overnight and I began putting him down for more cot naps during the day, rather than letting him curl into my chest (or on whoever else was nearby, whether my mum, husband or visiting friend) like a cuddly koala. And I got better at spotting those tired signs.

This lent a structured reliability to our days, which I realised I also needed. I found the unpredictability that life with a newborn can bring more than a little stressful, so a day that started with roughly the same wake time every morning, with play time, a walk in the pram, feeds, naps, bath and the like interspersed throughout the day in a predictable pattern made for a calmer mother and thus a calmer bub.

There was no great routine handout that I received when I became a mother; instead, it was the steepest learning curve of my life as I struggled to find our own rhythm. But 19 months in, with regular routines now making up our days – routines around breakfast, park time, reading, afternoon nap, tooth brushing – it all finally makes sense.

Rest assured new mothers – you too, will you find your own routine. I promise.