Many mothers often feel as though they are continually asking their little boys to listen, or telling them they can’t do things. It’s a constant battle that can be very frustrating for both mums and their sons.

If this sounds like you, author, parenting educator and mother of four sons herself, Maggie Dent has a few handy tips that may really help you to feel more connected to your son.

Here are three tips Maggie has for communicating effectively with boys.

According to Maggie, women can be in all sorts of rooms in our head all at the same time. For example, we can be chopping up food and giving out orders. But when it comes to little boys – well, they just aren’t wired this way.

“Little boys (and some men) tend to have a single focus. This means they pay attention only to what is happening at that moment,” says Maggie.

“So for example if you have a son who is watching telly as you are getting dinner ready and then you call him to come and eat, you don’t get a reaction. But because we are wise women, we think that he’s ignoring us deliberately so we may yell at him. Then, of course, that little boy thinks to himself ‘why is the woman I love more than anything yelling at me?’.

“What is actually happening here is he didn’t know you were talking to him in the first place.”

Clearly, frustration has a lot to do with communication – or miscommunication, rather. So where does that leave the mums of little boys and how can they communicate in a way their son will hear them?

Maggie says it’s as simple as giving him a tickle.

“Go up to your son, give him a little tickle and tell him dinner will be ready in five minutes. This gives him the chance to process your request,” she says.

Babyology Live Chat: Mothering Our BoysLIVE CHAT with parenting educator, Maggie Dent. We’re chatting about all things boys – raising them, loving them – to celebrate the launch of her brand new book, Mothering Our Boys.

Posted by Babyology on Thursday, 11 October 2018

When it comes to communicating with our sons, Maggie says less is more.

“Women love words and what the research is showing us is that boys take a little longer with their words,” she says.

“Little boys don’t have a lot of words about their feelings or what is going on, and this is the case especially when we want them to talk right now.

“Boys often take a lot longer to think about what might have been a difficult moment than we would, and so often mothers are left wondering why they don’t want to talk to us about it when we ask.”

So what is the solution? Put simply: give boys time. Maggie recommends waiting to talk a little later when they’re relaxing and in a more settled space. Or as she suggests, “After he’s taken his armour off.” This could be after bath time or around bedtime.

The trick with getting boys to cooperate is to use fewer words.

“If you want your son to get his hat on his head, don’t use big long sentences. Simply say, ‘David … hat … head.'”

Keep it short, sweet and to the point. 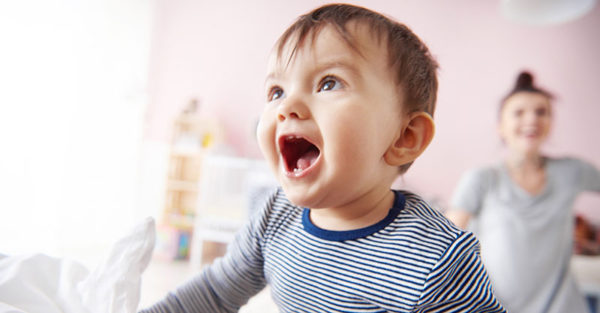 Finally, Maggie recommends using actions to illustrate to our sons what they need to do.

“If you want your son to put his bottom on his seat, don’t wait till you have to ask him the third time.

“What I suggest is going up and scooping him from behind, putting his bottom on the seat and kiss him on his forehead. Show him what you need him to do rather than always just telling him,” says Maggie.

At the end of the day, Maggie says it’s about realising the language and communication style for little boys is different from women or little girls.

“It’s all about soft, gentle connection. This way works so much better.”