Sure, they might be the cutest things around and turn you to jelly when they deliver hugs, but don’t be fooled – a toddler is a force to be reckoned with, and relentless in their battle for family domination. In fact, these clever little beings, with quick little feet, are making tidy use of everyday objects in their quest to assert their power – and they’re driving parents positively nuts in the process.

Let’s take a look at some often-used toddler weaponry:

As if it’s not enough that sleep-deprived parents have to listen to debilitating levels of noise throughout the day, the toddler will ramp up the torture by taking a leaf out of the disco book. Positioned at just the right height for toddler fingers to reach on tippy-toes, light switches make a party for a toddler, and strobe light hell for parents.

Mobiles are irresistible to toddlers. They’re shiny, they speak – they have screens perfectly sized for sticky toddler fingers. While it might be tempting to relinquish the mobile phone amid a full-scale tantrum, repercussions can be dire. Not only will the toddler phone your entire recent call log, he’ll drain your battery, delete your photos, then whack you on the head with it when you try to get it back.

(You’ll also never be able to have a phone conversation again because the toddler, having assumed ownership, will lose it if you don’t hand it over.) They’re just keys, right? WRONG! They are one of the most dastardly tools of torture employed by toddlers. Not only do the keys get hidden just prior to leaving the house, keys scratch, poke and prod you; keys are noisy; keys are piffed across shops, out windows – at heads. And if you have the garage remote attached to your keys…well, that’s a whole new level of torture.

Because there is nothing more satisfying for a toddler than pulling out tissue after tissue until the entire contents of the 500-unit box has been expertly dispersed around the living room floor. Not only does the parent have to collect each tissue, but try to fit them back into a box that is too small.

And then there’s toilet paper. The clever toddler will show that he understands where toilet paper goes, pointing to the toilet proudly and rendering you powerless to argue. But retrieving three rolls from the toilet bowl, squeezing out the excess liquid and disposing of it will leave you smiling through gritted teeth. 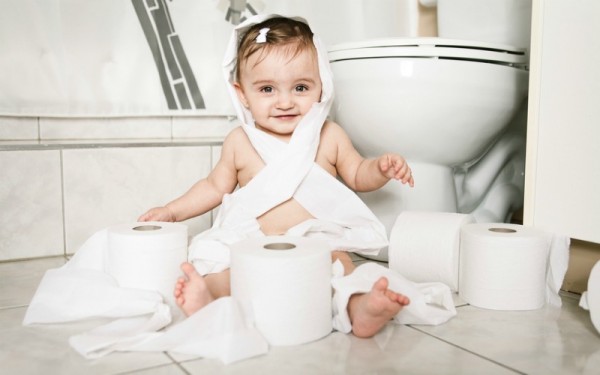 If you’ve ever washed lipstick out of carpet, then you know the pain makeup can inflict when it falls into the devious hands of a tot. And let’s not forget how those little finger nails like to dig holes in eye shadow and blush, and how tiny tummies find lip balm appetising.

They seem innocuous enough when they’re sitting out on the verandah, but once a pair of determined toddler mitts gets hold of them, pot plants are no longer a pretty decoration, but a pile of dirt on the kitchen floor, or – if the toddler is making a really serious point – in your bed. (Payback for refusing to get up at four in the morning, no doubt.)

These examples barely scratch the surface of toddler-tools used to inflict pain on parents, so keep your wits about you, stack hat in play and cleaning supplies stocked. Household items take on a whole new meaning with a tyrannical toddler in your midst.