Back in 2017, we reported that there have been ongoing issues with home pregnancy tests, and now there’s been renewed warnings on Facebook about the inaccuracy of tests.

“Don’t bother with these cheapies”

A woman has posted a warning to a Perth Facebook group about a pregnancy test marketed by Coles which is reportedly less than accurate.

“Don’t bother with these cheapies,” she wrote sharing an image of the test in question. “I got them I was 99% sure I wasn’t pregnant but had a few symptoms so wanted to be even more certain, and I went for the cheapest, figuring they’d do a good enough job even if not as sensitive as better brands. I know I can demand my money back (though they better not ask for the pee soaked sticks back) but it’s still a waste of time.”

Yahoo reports that it’s not just one woman who has had issues with tests, with many citing the Coles tests in particular. Varied results, ink leaking from tests, false negatives and false positives were all reported with these tests. 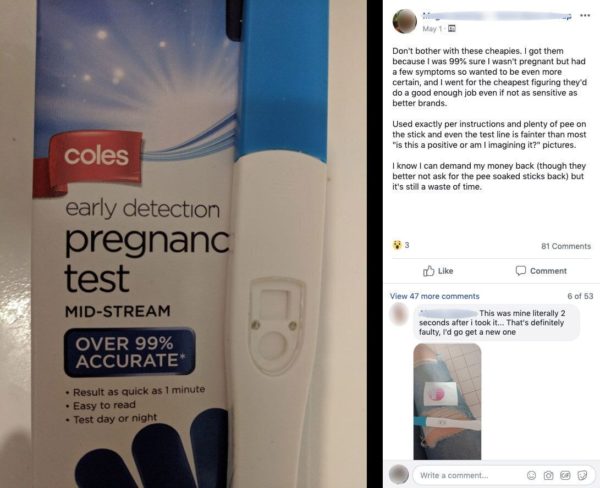 These tests have had mixed reviews on other platforms too, so it’s not just this one group that’s unhappy.

“Yes I’ve tried them & they are faulty af!” one woman posted on BabyCenter’s forum.

“They are SHIT! i brought a 3 pack. All test faulty,” another BabyCenter user wrote. “I emailed Coles who told me to take back for refund. Not really keen on taking back pregnancy tests i feel very uncomfortable!”

“Don’t bother wasting your money,” someone else posted on the same site. “You get what you pay for and I had two faulty tests out of a pack of three!”

“I bought the Coles ones this week and they were rubbish. Pink dye streaks all over the place and a very unclear result,” another unhappy BabyCenter commenter posted.

An accuracy problem across the board?

Others in the group suggested this will happen with any brand of pregnancy test. Indeed that’s what the Therapeutic Goods Administration (TGA) indicated back in 2017, but they noted that the devices now on the market are all up to scratch.

“The TGA has completed a review of all human chorionic gonadotropin (hCG) pregnancy self-test kits on the Australian market to ensure they meet sensitivity claims,” a TGA spokesperson said in a statement.

Many women who have used this particular product would beg to differ, we think.