When I recall the myriad of emotions I experienced in those early, sleep-deprived days with my newborn son, there was overwhelming love, happiness, excitement, and to be completely honest, fear.

On the emotional spectrum, fear and anxiety go hand-in-hand, and to say I was an anxious first-time mother was an understatement.

Those freak accidents or illnesses that befall heartbreakingly unlucky families.

The anxiety kicks in

Feeling afraid kicked in at the moment my son was born. The first time I laid eyes on him after he emerged from my c-section incision and was held aloft by my obstetrician like baby Simba from The Lion King, I nervously asked, “Is he okay? Why isn’t he crying?!”.

Of course, my obstetrician assured me that not all babies cry after being delivered, especially caesarean babies, but my nervous interrogations revealed how concerned I was about something going wrong.

Once we were back home, it was usually during the long overnight breastfeeds that my anxiety would kick in.

To help alleviate this, I called the 24-hour Maternal and Child Health Line numerous times.

First, it was to inquire about how worried I should be about my son’s breathing – his little snorts and snuffles at night sounded like he was hunting for truffles, but I worried he would stop breathing inexplicably. All normal I was told.

Next, I accidentally bumped the back of his head on the top bar of his swing chair as I lowered him into it one evening. In hindsight, it was a merely a tiny graze, but at the time I was convinced I’d done some lasting damage.

Next, it was about what I took to be an adverse reaction to his two-month vaccinations, which I realise now, was no reaction at all – he was simply tired, ready for his nap and screaming hysterically to be put to sleep.

The hotline must be accustomed to the many worried phone calls it receives from sleep-deprived first-timers, who are navigating motherhood without an easy-to-follow instruction manual.

While thankfully my nocturnal calls ceased after a few weeks, just as I was gaining confidence in my son’s resilience, the state in which we live, Victoria, was hit with what was deemed a “flu epidemic”.

The particular bad flu season in 2017 saw 8,500 babies and young children come down with influenza, and 1,255 people died, including, very sadly, an eight-year-old girl, Rosie Andersen.

As friends and family around us started to come down with the illness, my anxiety grew.

My Facebook feed filled with friend’s posts sending out SOS messages for chicken soup and Codral as they succumbed to symptoms; I was bombarded with alarming headlines about the epidemic every time I turned on the TV.

A quick canvas of my fellow mums in my mother’s group at the time revealed we were all terrified, and many of us took precautions to limit the chances of our vulnerable bubs catching the flu, such as staying at home as much as possible and avoided crowded places like shopping centres. 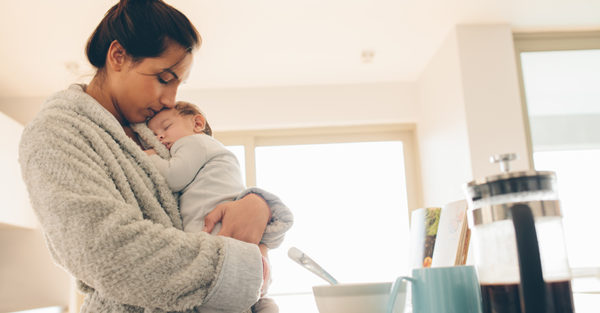 Why the fear factor?

In the age of the internet, parents have never had more access to information about childrearing and what can – and does – go wrong.

Even if you choose not to seek out the information, it will invariably come at you through social media.

As my experience during the flu epidemic highlights, trawling your Facebook feed can divvy up a host of horror stories, such as: “Officials warn of co-sleeping dangers after recent infant deaths”, “Baby girl nearly dies after contracting cold sore virus” and “Fisher-Price recalls all Rock ‘n Play Sleepers after 30 infant deaths.” (All real, recent headlines by the way).

Is it any wonder parents are paralysed by fear when it comes to their little ones?

Not only that, but it seems that every piece of infant and child equipment comes emblazoned with a bordering-on-hysterical warning label.

Our son’s car seat declares: “Warning! Death or serious injury can occur”, while his highchair states: “Children have suffered skull fractures after falling from highchairs”.

Similar warnings are also fixed to his travel cot, the baby bath we used in the early days, and even his toys and some clothing.

The message being broadcast to parents everywhere is that danger lurks in the most innocuous places … even while your child is sitting innocently in their highchair.

Time for a chill pill

Thankfully, as my son has gotten older, my fear has steadily declined. As I gained confidence as a mother, I realised that kids are quite resilient and stronger (and sturdier!) than you think. Every tiny bump to the head doesn’t warrant a frantic Google session about head injuries.

I’ve learnt to skip over any alarmist headlines about child safety on my social media feeds as they ratchet up my anxiety levels, rather than keep me informed.

Of course, I still worry about my son and try to keep him as safe as possible, but every cold and cough doesn’t have me jumping to the conclusion that he is coming down with a life-threatening illness.

And when both my husband and I succumbed to the flu back in 2017, and my son didn’t even come down with a sniffle, I realised that sometimes your little ones could also be stronger than their caregivers.

Letting go of the fear has let me enjoy the job of mothering so much more, and I know my son benefits from having a much more chilled out mama.