When you’re having a baby, chances are you expect to go home with your baby after you give birth.

“Harder than the day of delivery”

But if your child is born preterm, she will most likely stay in the neonatal intensive care unit or NICU.

This was the case for mum of three, Melinda Cruz who had all three babies needing care in NICU after birth. After coming to terms with idea of having a baby who needed some extra care and time in the hospital, it never occurred to Melinda in those first early days that this would mean that she would ultimately be discharged from hospital without her newborn.

“My first son was born six weeks early, and I was on bed rest for five weeks before I had him. It wasn’t until about the second or third day [after his birth] that someone came and spoke to me about having to be discharged,” said Melinda.

“And honestly, I look back and I think, was I naive to even not know that I was going to be sent home? I often say that the day I was discharged was probably harder than the day of delivery; just the shock of it, just having to walk away from him.

“I was absolutely devastated to not have that opportunity to be able to stay with him full-time.” “Doing it through tears”

As well as dealing with leaving her baby in the hospital, Melinda had to come to terms with the changes her body was going through after birth, including her milk coming in, which meant expressing every three hours, as if she had her baby with her.

“Setting your alarm clock at night when you don’t have your baby with you … You’re doing it through tears; it’s not the situation that you want to be in but I was really determined to do that.

“I think the hardest thing for me was trying to heal as well, so I had stitches that I needed to recover from and I wasn’t resting. But you put your health on the backburner. This is all about the baby, so you push yourself.”

Melinda soon realised there weren’t any support groups for her to reach out to, giving her the idea to start the Miracle Babies Foundation, which now provides vital support to families of premature and sick babies.

“I think back to when I first initiated the concept and I had a really good conversation with the head of the unit where my boys were born. One of the things that struck out was when he said to me, ‘We can look after the babies medically and physically, we’ve got state-of-the art units in this country; we’re very fortunate.’ But he said, ‘If we aren’t looking after the emotional wellbeing of the family we’re sending them home too, then we’re only doing half our job.’”

“So that was a really big way that the foundation was able to come in and actually collaborate with them and say, ‘Well how do we do this?’ It goes beyond the time in hospital.

“Just having somebody to hold your hand, or be there through it would have made a world of difference and that’s what we’re here for.” 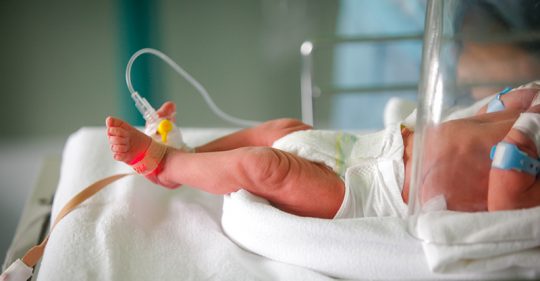 Parents of premmies are more likely to suffer PND

Research has found parents of babies born prematurely are more likely to suffer post-natal depression, and while the results aren’t really surprising given the circumstances, Melinda says it’s not just mums who are suffering.

“The stats are showing that dads are very similar, two and a half times [more likely to suffer post-natal depression] compared to if their baby was born full term,” explains Melinda.

“I know for me personally, when we went through it with our second son. He was born at 27 weeks so we had a nine-week hospital stay with him. And if you look at someone who’s just got four weeks annual leave, it doesn’t cover it. So he [Melinda’s husband] had to go back to work. He was trying to be strong for me and strong for the baby. We had a little toddler at home and he had to be fully functioning at work. So there’s just not a lot of focus, or I guess awareness, in terms of what dads are going through.

“This research shows that they’re suffering just as much as mum is … we need to be able to make sure that the conversation gets started, that we talk about it and we allow them to talk about it.”