For many families the gift of a particular LOL Surprise! toy appears to have ended in tears, with their children’s fingers becoming wedged inside the toy.

Some children who received the LOL Surprise! Glamper van toy for Christmas (and even prior to Christmas) have put their fingers into the mechanism meant to open the ‘glamper’ up, only to have them remain stuck fast in the toy’s cavity. This is not through misadventure, but rather through following the toy’s instructions.

The toy requires children to put their finger into a particular hole to press a button which pops the camper van toy open.

For some kids this is a very tight squeeze. Once their little fingers go in they do not want to come out again. Talk about a Christmas downer.

“Warning about LOL Glamper,” mum Camille Katherine, wrote on Facebook according to MetroUK. 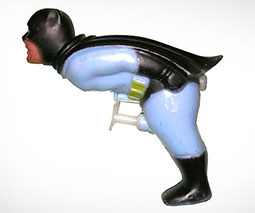 “This weekend, while using the button that she was supposed to push to open up her LOL Glamper, my daughter got her thumb stuck and was unable to remove it.”

“We tried for 20 minutes without luck and had to call our local EMS who were able to break the toy off from her.”

A quick skim of social media shows a number of sad stuck-finger stories, with parents urging others to beware of this bite-y toy.

Someone’s even posted a video on YouTube suggesting how children’s fingers can be extracted safely if they DO get stuck (scroll down).

The clip suggests staying calm, applying some WD-40 and asking your child to PUSH the button further in to help release the mechanism.

Be very careful with the "Glamper" with kids. We got it for my daughter for Christmas and she loves it. She is obsessed…

LOL Surprise! themselves have issued a safety warning and apparently the bite-y part only affects some of the Glamper toys. They’ve since updated the design to stop this happening.

“We are deeply saddened to see the images and comments on the LOL Surprise! Glamper,” the company said on Facebook.

“We have heard you and are issuing a product safety notice. If you have any concerns please go to our website https://bit.ly/2EVyYVx and customer service will promptly assist you. Our fans and customers are our number one priority!”

Yes, this happened to us yesterday. Had to saw it in half to get access to release our daughter's finger.

All for the sake of ONE piece of restraining plastic to stop the tab from pushing in too far.

When taken to task by a parent about this safety issue, MGA Entertainment CEO Isaac Larian played the toy’s design issues down.

“We have caution on the button,” he wrote on Linked In.

“Very few people who aren’t reading the instructions. Design has changed. The [Glampers] with these issues are very few out of 1 million sold,” Mr Larian continued.

We are deeply saddened to see the images and comments on the LOL Surprise! Glamper. We have heard you and are issuing a…

Parents are not happy with the company’s responses. They are hoping for a product recall.

“We gave my daughter one and Christmas night her finger got stuck,” one mum wrote. “We worked and got her loose. She was devastated. She cried because that’s all she wanted for Christmas. I’m hoping that you recall the product and replace with something safer.”

Some wondered why the toy was redesigned without a recall of the original product which was clearly hurting some children.

“It’s pretty sad that they KNEW there was an issue months ago and never issued a statement about it!” another parent commented. “They waited until children got hurt to issue a ‘warning’! The completely remade and reissued this thing KNOWING the original was defective! How is this legal?!”

If you have one of these toys at home and are not sure whether it poses a risk to your child, get in touch with  MGA Entertainment’s customer service folk via this link – https://bit.ly/2EVyYVx.