Most social media platforms restrict their audience to those over thirteen. Even though my eldest is at least six years away from that it hasn’t stopped me freaking out about it. What hope did I have of protecting her and my son from the image-saturated, false world of social media?

My teenage years were relatively private. Photographs needed several days to be printed and then you kept the negatives stashed somewhere under your bed. You only worried about what you were wearing when the school dance rolled around, or you went on a trip to the local cinema to catch a movie.

Instagram has made ‘image’ front and centre of the way people interact online. Where once pen pals wrote letters, now they post photos of themselves in bikinis and wait for the likes to roll in.

We’re still catching up with the consequences of our choices

As a member of Generation X, I’ve evolved along with the technology. I vaguely remember setting up my Hotmail account, and reluctantly joining Facebook, convinced it would be a flash in the pan (much like MySpace).

Many of us threw away our right to privacy without a second thought. Such a human need, to be private, and yet now many of us live large on a public stage. The horse bolted before any of us knew we’d opened the gate. All of a sudden we were scrambling to understand what it meant that we’d shared so much, and then later, the impact it would have on our children.

It’s easy to forget that, as old as social media feels now, it’s still pretty new in terms of how fast technology has progressed through the generations. Look at the timeline of the telephone. Patented by Alexander Graham Bell in 1876, they weren’t widely used until around 30 years later. Mobile phones came along 75 years after that. That’s a lot of time for parents to work out acceptable boundaries with landlines and how long their kids could talk on the phone before they cut the cord.

No other generation of parents has seen this amount of technological change in such a short period of time.

We may be dealing with faster change than ever before, but we are more equipped than any previous generation to deal with it. Not only do we know what life was like before it was uber-connected, but we are also the most informed bunch of parents the world has seen.

As we have come to grips with the consequences of living our lives online, we’ve started looking at how to deal with it. Jean Twenge’s book IGen has shown the impact of social media on children who grew up with it (as opposed to before it, as we did).

We understand now the negative impact platforms like Instagram can have on mental health. We see the risks and so have started putting in boundaries, which is what parents do. Making sure our kids don’t join social media platforms until they’re ready. Reading up on the best way to be involved with their online lives. Parents have started talking about ‘sharenting’ and learning what it means to give children the right to privacy online.

Like every generation of parents dealing with new technology, we’re working it out as we go.

One of the main groups helping parents in Australia deal with the rapid change in how our kids interact with technology is the Office of the eSafety Commissioner. They have dedicated resources for parents. When I was interviewing the Commissioner Julie Inman Grant about sharenting, she said the most powerful thing we can do is to ask our kids for their permission before we post an image of them.

My daughter had just turned five and was a regular feature on my social media feed. I thought I’d give it a try. She took to it like a duck to water. Not only did she start refusing to let me post images, but she would also tell me who I could send her image to (through text).

As soon as he could articulate his words clearly, my son followed suit. The only images of my kids you will see on my feed these days are ones they have given me explicit permission to post. 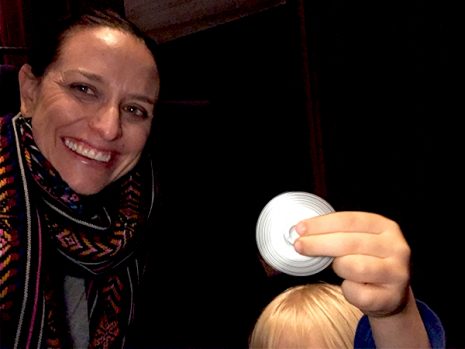 With my son at the movies. This is the only photo he would let me post.

At seven and five they show greater awareness and understanding of privacy in the world of social media than I ever did, even in my 20s. They are following a generation who have grown up online, and have a clearer perspective of the fall out from that.

My kids want privacy, and that fills me with the hope that their interaction with social media will be different from what has come before. As I continue to learn and set boundaries for them the future looks brighter than my previous imaginings of their lives online.

There’s no way of knowing what else will change, but they’re starting from a strong place.

Built with each cute photo they refuse to let me post online.