Bluey, the Emmy award-winning animated series about a family of anthropomorphized cattle dogs, has become a ratings phenomenon since it was first broadcast on the ABC in 2018. Bluey follows the eponymous six-year-old Blue Heeler, her younger sister, Bingo, and their playful parents, Bandit and Chilli.

As part of our new research project, Australian Children’s Television Cultures, we are surveying audiences about how they interact with Australian children’s programming.

The show adults are keen to watch with kids

From over 700 adult responses, Bluey was the TV program parents were most keen to watch with their children. Respondents celebrated its unambiguously Australian setting, irreverent humour, and family oriented themes at a time when other children’s content, such as the dead-eyed nursey rhymes of YouTube channel Cocomelon, seem to only offer generic, computer-generated distractions.

Indeed, many adults without children said they watch Bluey.

One respondent described Bluey, which is set in Brisbane, as “representative of an idealised Australian ethos — relaxed, curious, and hard-working”.

And as a parent explained:

“It’s nice for children to see familiar landmarks and have issues that are current to them, as opposed to Peppa Pig and needing to explain why we don’t have snow at Christmas”.

One aspect of Bluey audiences consider particularly relatable is the family dynamic, including the games Bluey and Bingo play with their resourceful parents. One locked-down Australian mother has even created “50 Days of Bluey” – guidelines for home activities inspired by the show. Bluey’s games include: ‘Daddy Robot’ in which a ‘malfunctioning’ Bandit teaches Bluey and Bingo the importance of tidying up; ‘Rug Island’, a kids-only oasis that the Heelers create in their backyard; and ‘Mount Mumandad’, in which Bluey and Bingo climb their exhausted parents after they have collapsed on the couch.

Then there’s the humour, described by one respondent as ‘full of Australian cultural nuances’.

As one parent noted:

“Bluey ‘gets’ parents perfectly … we enjoy watching it so we steer our kids towards it.”

Read on many levels

The show can be read on multiple levels, which is why it can appeal to adults too. For instance, a recent Father’s Day episode saw Bluey’s dad, Bandit, discuss his conflicted feelings about getting a vasectomy with another dad.

As Bandit explained, “I’m keen to get it done, but, Chilli, [his wife] she wants to keep her options open”. This adult moment in what is ostensibly a kids’ cartoon generated much discussion on social media. One fan tweeted:

“I’m a grown man wondering if a cartoon dog family is going to have a baby. Weird life this is.”

From election day barbecues to Queenslander houses and backyards, early audience responses to our study agree Bluey offers a snapshot of Australia. However, many were quick to point out this snapshot doesn’t provide the full picture.

Bluey criticised for lack of diversity

Bluey has been gently criticised for a perceived lack of diversity. The show centres on a hetero-normative nuclear family in a world largely populated by able-bodied characters, with Anglo-Australian names and accents. As one respondent noted:

“We’re definitely getting better [at reflecting Australian culture] with shows like Bluey, but as a gay man I would love to see more LGBT representation in kids’ shows. It would be nice as a kid to know you’re valid.”

National babysitter Play School was celebrated for its continued commitment to featuring hosts from a variety of backgrounds, and the greater diversity in The Wiggles’ new line-up was applauded. 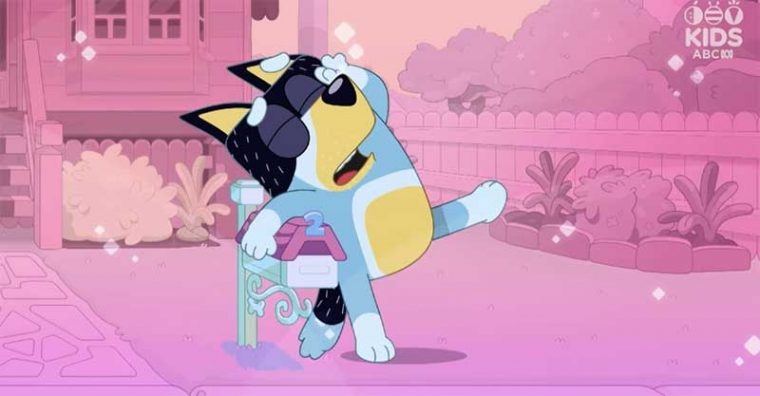 One respondent wondered if the humour and references in Bluey were “lost on audiences outside of Australia”. However, since the Walt Disney Company acquired the show’s international broadcasting rights in 2019, Bluey has been reaching a wide overseas audience.

While some small accommodations have been made for international viewers — ‘capsicums’ became ‘peppers’ in the UK, and a gag with a pooping pony was cut for Disney Junior — the show has resisted being watered down. As such, it is taking bilbies and ‘bush wees’ to global audiences.

At a time when the commercial broadcaster quotas that previously protected local kids’ TV have been scrapped and international shows like Paw Patrol and Peppa Pig can be instantly summoned by tapping on a smartphone, the local enthusiasm for Bluey is heartening.

“I have friends in the US whose kids watch Bluey and they say their kids are talking in Aussie accents,” noted one respondent with pride.

Said another: “Bluey will be forever iconic not just to kids but their parents, not just in Australia but all over the world”.