How difficult is it to get your child’s attention while they’re playing on their iPad? Do they seem transfixed, in their own world, even addicted? Do they get mad when you tell them it’s time to switch off?  Here’s what the health experts say too much screen time might be doing to your kids (and you).

As a parent, you soon realise that young children have trouble self-regulating. If they enjoy something, they want to keep doing it, regardless of whether it’s good or bad for them. Hence why some children are becoming ‘addicted’ to electronic devices. Chinese doctors even consider it a clinical disorder, with some teens so hooked on video games that they no longer eat, sleep or take a break to use the toilet. In fact, they become so disoriented, the real world can appear to be the fake one. The treatment is to completely cut these children off from all types of media – a kind of tech cold turkey.

If you let the kids use iPads and devices before bed as part of any wind-down routine, it may be time to rethink the strategy. A review into screen time and sleep in school-aged children found that screen time actually mucks with sleep. Same goes with tweens and teens who keep their phones and iPads on their bedside tables and wake to check them in the night. The advice from researchers? Just don’t do it. It might be hard, but banning smart devices from bedrooms at night is the way to go.

The Department of Health recommends that children aged between two and five should be limited to less than one hour a day sitting and watching television or using other electronic media. 3. Your child may miss out on making awesome memories like these

Polish mum of two, Izabela Urbaniak, creates a photography series each year, called Summertime. It’s made up of images of her children enjoying their holidays, without any form of screen – no televisions or smart devices.

She says the series was initially inspired by her own childhood holidays spent with her grandmother. And the photos of her kids conjure up memories of very different childhoods, when kids spent hours upon hours outside, and away from illuminated screens.

And really, doesn’t everyone want this for their children? Remember what it was like to have a real conversation with someone? One that didn’t involve emojis or LOLing, but stretched for a couple of hours and involved copious amounts of milk and biscuits? Sadly, many of our children will never know the joy of simply being involved in daily face-to-face conversation, because the digital world makes it so much easier to just send a text.

Scientists at UCLA did a study,  and discovered that children who went for five days without any form of screen time, did significantly better at reading human emotions than a group from the same school that spent hours each day using electronic devices.

5. You reap what you sow

While we lament how much time children are spending on their devices, there’s a stark realisation that should be taking place. Children are mimics. They love to copy, and they model their behaviour on that of the people they admire the most, and that’s usually their parents. And if we’re addicted to smartphones and tablets, it’s a safe bet that our kids will be too.

A Chinese advertising campaign created a series of sobering images, depicting just how these devices can become barriers between children and their parents. 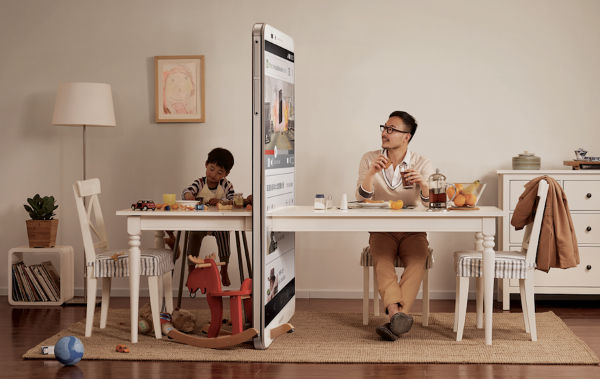 Experts recommend developing healthy screen-time habits for kids, such as: