A study from the University of Columbia has demonstrated that anger is a feature of postpartum mood disorders like depression and anxiety, which sounds standard enough, except the emotion ‘anger’ has never been mentioned when testing new mums for the postnatal depression.

Weird, right? Because feeling resentful, irritable and angry sounds like it would go hand in hand with anyone struggling with early parenthood, but the questions featured in the Edinburgh Postnatal Depression Scale don’t ask new mums about this emotion at all, says writer Kate Schweitzer in a recent POPSUGAR article. Instead, the questions ask about how much new mums are worrying or feeling guilty since having a baby to come up with a score that indicates whether they are experiencing PND or may be at risk of it.

What we already know about postpartum depression

The Edinburgh Postnatal Depression Scale has been successful in identifying many new parents affected by postpartum depression and anxiety and has been fundamental in helping these mums and dads get the support they need.

Early parenthood is hard work, and can also be an isolating and emotional time for new families. Feelings of anxiety, guilt, hopelessness and loss of pleasure in activities are common features in the condition, as are crying more than usual and loss of appetite or feeling very tired. Of course, you don’t have to have all these symptoms to have postnatal depression or anxiety, and it’s normal to have teary or ‘bad’ days in parenting. But if you’re feeling quite low for more than a week or two, you should let your GP or health professional know as soon as possible. What’s anger got to do with postpartum depression?

As well as the symptoms listed above, many people with postpartum depression or anxiety report feeling unusually angry. However, because this emotion isn’t inquired about as part of the Edinburg questionnaire, there’s the chance that some new parents aren’t being supported with this and may not even be identified as being affected by PND at all.

In fact, feeling angry can make the depression even more intense and long-lasting, says researcher Christine Ou. The study looked at postpartum depression literature over a 25 year period and found evidence that being angry and depressed can worsen the depression. “That can have many negative effects on the mother, child, and family, and on the relationship between parents,” Christine said in a university interview. 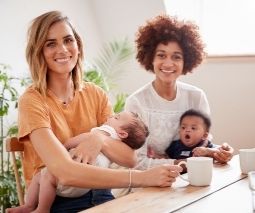 9 things all great mum friends say to each other

Factors that contributed to anger in the postpartum period included lack of support, unrealistic expectations of motherhood and feeling powerless, according to the data analysis used in the study.

The pressures on new mums can take their toll

Christine noted the pressures and judgements new mums face could take a toll on their wellbeing. “Mothers may feel that they have not met their own expectations and that also others may judge them because, for example, they’re formula-feeding instead of breastfeeding,” she said. “Many mothers have also expressed feeling let down by others in terms of support from partners, family members, and health-care providers as well.”

So, why hasn’t postpartum anger been examined more closely before? According to Christine, talking about anger isn’t always considered acceptable in some cultures. For this reason, it’s impossible to say which comes first – the depression or the anger.

But the researchers want us to start acknowledging anger in the postpartum period so the right support can be offered to mums and their families. “We know that children who are exposed to parental anger or depression are at a greater risk of developing emotional problems,” says coauthor Wendy Hall said. “It’s important for healthcare providers to examine maternal anger in the postnatal period in order to understand and manage that risk.”

If you or someone you know are suffering from depression and/or anxiety – during pregnancy or after having a baby – PANDA are at the ready to provide support and advice. PANDA National Helpline – 1300 726 306 (Mon to Fri, 9am – 7.30pm AEST)

Need some baby sleep advice? Our Parent School sleep experts can help. Click to find out more or book a one-on-one session.