Yesterday the nation was shocked when news filtered through that a teacher was seriously assaulted by a parent at a Byron Bay primary school.

Byron local and Thor star Chris Hemsworth felt the same, and turned up at the school to help out and provide a reassuring presence.

Chris and Elsa are mum and dad to five-year-old twins named Tristan and Sasha and a seven-year-old daughter named India. The couple are based in Byron Bay where the tabloids have closely been following the build on their supermarket sized new home.

Yesterday a horrible incident at the local primary school came to light, with a crime scene being established and the school going into temporary lockdown.

“A parent has been arrested after allegedly stabbing a ‘gentle and caring’ teacher with scissors at a primary school in Byron Bay,” The Guardian reports.

“The woman, 36, allegedly stabbed the 28-year-old male teacher in the face and arm at Byron Bay public school about 7am on Tuesday. Police say they will allege the two were ‘speaking on the premises before she approached him with what’s believed to be a pair of scissors.'” 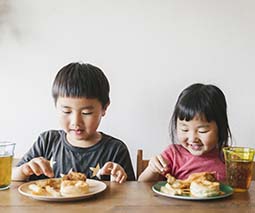 It’s hard to know how the school community would be coping. Most certainly the students and teachers would be extremely distressed, which we’re guessing is why Chris Hemsworth turned up to provide a bolstering presence. A superhero in the kitchen

Chris and wife Elsa Patacky instantly volunteered for canteen duty, arriving at the school after the lockdown was lifted and helping to churn out sushi rolls for the kids.

All of Chris and Elsa’s children apparently attend Byron Bay Public School, and the couple obviously figured that having their very own real-life indestructible action figure would set some little minds at ease and distract them from the events earlier in the day.

“Always helpful to have a superhero in the kitchen,” Elsa posted on Instagram and honesty she’s not wrong.

“I dominated” Chris confirmed of his canteen duty pop-up.

A NSW Department of Education spokesperson told the ABC that “counselling has been made available to staff and students.”