Preparing for your unborn child is an exciting time, especially when it comes to setting up the nursery and choosing a cot. However, beware the beautifully presented cots and bassinets – they’re not as pretty as they look.

This is what first-time parents see

With Red Nose Day here to remind us of the very real dangers of SIDS, midwife and maternal and childhood nurse, Belinda Joyce is shocked to still see cots displayed in shops, TV advertisements and on social media, dressed up with fluffy cushions, toys, canopies and all manner of accessories.

“In 2017, we still had eighty-seven deaths to SUDI, which is that sudden unexpected death of an infant,” says Belinda. “That does include some SIDS deaths but it also includes sleep accidents where there’s been entanglement suffocation or entrapment, and it’s those accessories that are generally to blame.”

Recently, Belinda went into a baby shop and out of 15 cots, there was only one dressed correctly. “It literally had a fitted sheet on it. I think they just hadn’t finished making it up,” she says. “Every other cot had at least five things that were not safe.”

For Belinda, who wrote the book Survive and Enjoy Your Baby, it’s worrying because this is what first-time parents see. “That’s what parents are thinking how a cot should look,” she says. “Then when we suggest a cold, clinical, unfriendly looking cot which is really the difference, it doesn’t look like a loving place to put your beautiful precious newborn.”

While it may not fit the image of what your baby’s first bed should look like, Belinda advises taking the following four steps:

1. Straight to the cot

Belinda says a bassinet is not suitable for a newborn and it’s safer to opt for the cot right from the start. “A cot rather than a bassinet is the best place to start because they have safety standards and bassinets don’t,” she says. “This is a shock to many new parents because I would say 95 percent of new babies go into a bassinet first just because they’re small and a baby looks right in a bassinet, whereas you put a newborn baby in a cot, they look so tiny, but it is still much safer – so straight into a cot with a firm, well-fitted mattress.” 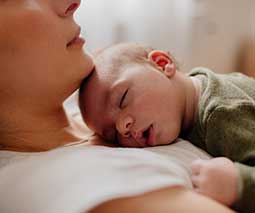 When it comes to bedding, Belinda advises keeping things clear and uncluttered. “Just some simple sheets, a fitted sheet and a top sheet, and then a blanket or two that are made of a natural fibre,” she says. “Then you might want to swaddle them in a muslin cloth or a safe swaddle bag as well.”

And while it doesn’t look very attractive, it’s important to short sheet the cot with the baby sleeping down one end, with little chance of wriggling down underneath the blankets. “Their feet are almost at the end of the cot,” says Belinda. “Of course, it makes the cot look even worse if the baby is right down by the end, but it’s much safer.”

3. No pillows or cushions

As adults, some of us can’t sleep anywhere without our favourite pillow; however, it’s not the same for babies. “You don’t need any sort of pillows, cot bumpers, quilts, any of those things,” says Belinda. “You don’t even need a pillow until they move out into a bed, and even then they don’t really look for it because they’ve never had one.”

4. Toss out the toys

Newborns generally don’t have strong attachments to toys and should never be encouraged to sleep with one. “They can still have a favourite teddy bear or a doll or something like that,” says Belinda. “They can cuddle and play with it, but it shouldn’t be put to bed with them.”