The makers of the high-tech contraption, the Snoo Sleeper guarantee that your bub will get an extra hour of sleep every night. So, does it deliver on this promise? Mother-of-two, Jessica Mudditt put it to the test.

While caring for my newborn in hospital in August, I was so tired one night that instead of getting out of bed, I tried draping an arm across the hospital bed rail as I gently rocked her bassinet to and fro. It was 4am and for hours, Claire had been waking up almost as soon as she’d fallen asleep. I was sore from my c-section and seriously sleep-deprived, so I really hoped the rocking would do the trick. It did – although it took 40 minutes. “Nothing short of amazing”

I couldn’t wait to get Claire home to her Snoo bassinet, because I suspected it would be a game changer for both of us. And without a doubt, it was: by the time she was six days old I was googling, ‘Does my newborn sleep too much?’

She is now nine weeks old and is already starting to sleep through the night, with her longest sleep clocking in at six and a half hours (I know that because the Snoo has a cool app with a sleep log). My eldest daughter was also a good sleeper, but not this good – to me, this is nothing short of amazing.

While it’s impossible to know how much credit is owed to Claire for being a great sleeper and how much should go to the Snoo, I do think it is an incredible product. This time around, I never anxiously wonder during the day what the night has in store for us. My attitude is different because the nights with Claire have been a breeze, with just a few wake-ups for feeds and then a stress-free settle back in the Snoo.

I also know from experience that in the blink of an eye, my gorgeous, snuffly newborn will become a rambunctious toddler. So I want to savour this while it lasts. What is a Snoo?

A Snoo is a high-tech bassinet that soothes your baby with sound and motion. It mimics the natural rocking and shushing we do to comfort our babies – that is, when a baby is distressed, we tend to rock and pat them more vigorously than when they are content. The Snoo has an inbuilt sound sensor that detects crying and responds with different rocking speeds and white noise.

At first, putting Claire in the Snoo felt strange. Its in-built swaddle reminded me of a straightjacket, with a thick Velcro strap across her arms, which are down by her sides inside the Snoo sack. While that isn’t my idea of a comfy sleep, I know that babies need very different things then adults – after nine months in the womb, they love feeling tight and secure, and the Snoo recreates those conditions. I also love that the Snoo bills itself as the world’s safest bassinet: there has never been a single death or injury reported in a Snoo and babies have spent a combined 75 million hours sleeping in them.

Babies frequently enter periods of light sleep and during those times they are susceptible to waking up – the genius of the Snoo is its ability to soothe them back into dreamland. If the Snoo hasn’t settled Claire within 60 seconds, I know it isn’t more sleep that she needs but something else: a feed, a cuddle or a nappy change. If I haven’t already taken her out of the Snoo by the time two minutes is up, it turns itself off and I get a notification on my phone telling me that ‘Claire needs my care.’

Is it weird getting notifications about my baby’s emotional state? A little. But take it from me, you adjust quickly. I am now so used to the idea of a motorised bassinet that a static one seems old-fashioned, like a car with windows that have to be manually wound up, instead of being electric. The Snoo is the future; the Tesla of bassinets. 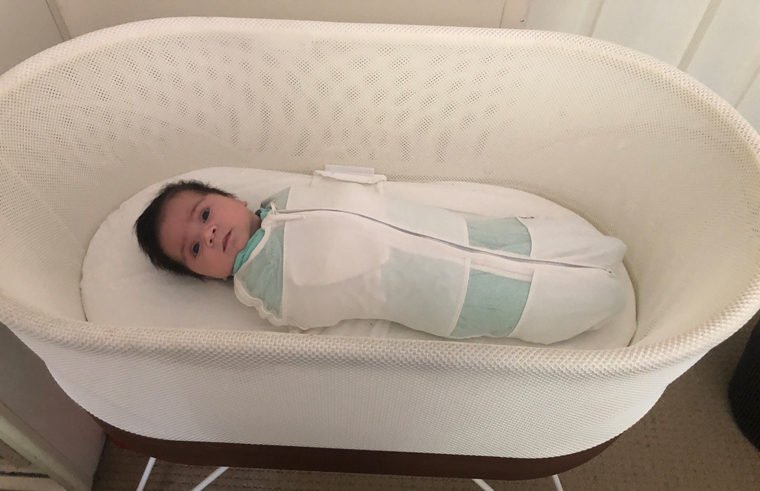 Putting a price tag on sleep

As we know, a Tesla is famously expensive. The Snoo is also a big ticket item, at almost AUD$2,000 (I’ve owned cars worth less than this bassinet!). A baby will only last six months in a Snoo before they outgrow it and need to move into a cot – so it is a lot of money for a short duration. For some, it makes sense to rent a Snoo by the week. It works out to be about the cost of a cup of coffee per day – and I daresay with a Snoo you won’t need the extra shot of caffeine to get you through the day. It’s also worth noting that there are regular sales, so check online.

For what it’s worth, my advice would be to skip the fancy pram and invest in a Snoo instead, because the benefit of extra sleep is hard to beat. You also won’t need to buy any swaddles or sleep suits because the Snoo comes with its own ‘five-second-swaddle.’ I was always hopeless at swaddling and much prefer the easy-as-pie Snoo swaddle. My only quibble is that it comes with just one swaddle in each size, which is no match for a spewy newborn. You can buy extra ones, but it would be preferable not to need to. Similarly, Claire had a lot of mucus after her c-section delivery and would have benefited from having her head slightly elevated. Snoo’s ‘Leg lifters’ cost an extra $30 – and once again, you don’t expect any parts to be sold separately.

Nonetheless, this is a brilliant bassinet that I wholeheartedly recommend. I love stroking Claire’s head and watching her as she sleeps in it – she looks so blissed out.

For more information about the Snoo Bassinet, head to Happiest Baby.