Our sleep journey was a somewhat unique one. Unlike a lot of babies, my son was a pretty great sleeper in the beginning, but at eight months everything went pear-shaped.

Over the next few months, I would do battle with serial catnapping, ridiculously early mornings and regular, multiple wakings overnight. The latter of which nearly broke me.

It was at that point that I finally reached out to a sleep consultant. Some swift changes were made – no pram or car naps, no comfort feeding and controlled comforting.

I can happily report that not long after, my son started clocking 12 hours straight overnight, and a solid, restful nap in the cot each day. (Though illness, teething or an overflowing wet nappy does throw a spanner in the works at times!)

Now that he’s 23-months-old and I’ve (mostly) caught up on all the sleep I missed during that period, I’m amazed at how I was even able to function like a proper human being. Though ‘functioning’ might be a bit of an overstatement.

While we’re all aware of how important sleep is, it’s not until you’re averaging a mere four to five hours a night, in one or two hour blocks at a time, for months on end, that the health and emotional ramifications of little sleep surfaces.

This kind of sleep deprivation wreaked havoc, not only on my mind but also my body in three major ways.

1. A rollercoaster of emotions

One of the most profound effects of the sleep deprivation I experienced was undoubtedly the emotional toll it took on me.

Of course, this wasn’t all of the time. I was still enjoying my life as a whole, and I cherished the time I spent with my son. But some days I was just going through the motions and trying to get through each sleep-deprived day at a time.

My memory and concentration levels were definitely affected, and a lot of the time, I think I was on autopilot.

Towards the end, I began to dread the sun going down. Instead of being a chance to rest and recoup, nights to me meant waking every hour or so to attend to a crying bub, and it really took a toll.

Throughout this time, I also seemed to be visiting my GP every other week.

I experienced strange, niggly little health complaints like pins and needles in my hands and feet, breathlessness at night, and I’d get regular infections like tonsillitis.

Lying in bed at night, my heart would race and I could hear the rhythmic thumping of my pulse in my ears.

I’d be in bed by 8pm each evening, trying desperately to get some shut-eye before my son woke for the first of many times during the night, and my racing heart would make it difficult to fall asleep, which only compounded matters.

Studies have shown ongoing sleep deprivation results in increased resting blood pressure, which can cause irregular heartbeat and pounding in your chest, neck, or ears, so it’s possible the interrupted sleep I was experiencing caused this strange symptom.

My doctor was never able to identify a source of many of these maladies, but as soon as I started sleeping again, it all disappeared. What does that tell you?!

3. Rapunzel, let down your hair?

Around this time, my hair started falling out dramatically. I’d lose handfuls of it in the shower, and after blow-drying my hair, there would be strands of it all over the bathroom floor. Not pretty!

It was way past the time when postpartum hair loss normally occurs, so I believe my body was simply under so much stress that it caused my hair to fall out.

I actually ended up with a small bald spot at the front of my scalp, which was mildly embarrassing. Thankfully, once I started sleeping again, my hair recovered completely and is now back to normal. 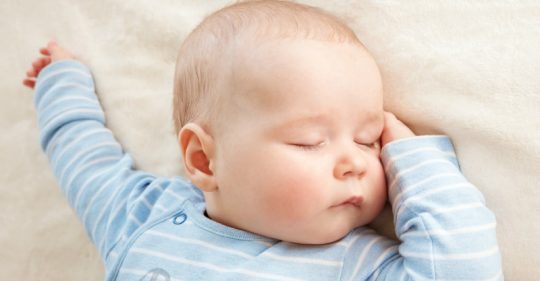 My #1 tip for fellow sleep-deprived mums

Get help sooner rather than later! I kick myself that I let the sleep deprivation go on for as long as I did … five whole months in the end, which is just madness.

I suppose because my son had been a good sleeper for the first eight months of his life, I kept waiting for him to return to this but things only got worse.

Sometimes it takes a professional to help you see the forest for the trees, and that was certainly the case for me.

With the benefit of hindsight it seems so simple – take away the sleep associations I had established for my son (the comfort feeding, pram naps and attending to every single grizzle) and he had no need to wake every hour or so in the night.

But when you’re that tired, you’re simply not thinking clearly, and the idea of sleep training can seem overwhelming. I’m here to tell you, though, that it’s worth it; a good night’s sleep is so incredibly important for every mum’s health and wellbeing.