In today’s episode of ‘Stars! They’re Just Like Us!’ breastfeeding mum Turia Pitt tells us one of her boobs is bigger than the other! 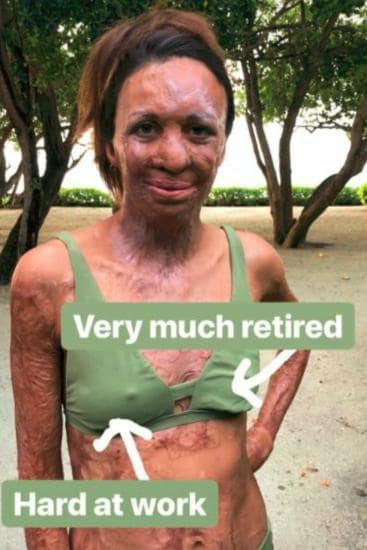 One of these things is not like the other

Yep. Turia Pitt recently revealed she’s a total righty when it comes to feeding her baby and other mums are cheering on in solidarity. She posted an Instagram story, noting that not only is she a righty, but that her left boob has pretty much packed up and gone home.

Anyone who has ever breastfed a baby will giggle in recognition of this common wonky boob fiasco. Not only do babies often prefer one boob to the other, mums often feed much more easily from a particular side. In Turia’s case it’s a right boob situation for baby Hakavai and she’s made it clear that the other boob has basically retired from play.

“Very much retired” she noted of her left boob.

“Hard at work” she labelled her right one.

The udder one, please

If you have ever breastfed, you’ve probably encountered a tiny tyrant rejecting one knocker in favour of another. One of my own children used to (accurately) bleat “Deee udder onnnne” very urgently if I tried to offer them their non-favourite (left) side.

Everything has changed and yet I am more me than I’ve ever been ?

Turia’s going through the very same thing and she’s not only keen to talk about it, she’s offered up photographic evidence for any likeminded Frankenboob-ed followers. It’s refreshing to hear some real talk from the celebrity mummy trenches – and some brilliantly candid stories about the steep learning curve breastfeeding can be.

“I realised it was the first time I’d ever breastfed and it was Hakavai’s first time too and the first time you try anything new you’re not going to be an expert at it!” Turia wrote earlier this year. “We’re not experts (yet) but we’re definitely getting the hang of it.”

Hakavai is now seven months old and after some initial wobbles it seems he and his mum have brilliantly got the hang of how to boob.

Turia and fiancé Michael Hoskin welcomed wee Hakavai in December last year, the first child for both of them and a little ray of adorable sunshine, from all accounts!

People keep complimenting me on my beautiful baby girl. Must remember to pop a flower behind his ear in the future.