There is so much pressure on mums and dads to parent according to the expectations of the society and culture we live in. But when you look at how the rest of the world does it, you realise there is no ‘right’ way.

Take breastfeeding for instance. What we call ‘extended breastfeeding‘ (which is nursing beyond a year or two), mums in other countries call ‘full-term breastfeeding’ – which simply goes on for as long as their little one wants to feed before self-weaning.

Here are some interesting cultural traditions and facts about breastfeeding around the world to remind you that what works for you and your baby is best; not how everyone else in your mother’s group is doing it.

In Mongolia, breastfeeding is celebrated and public breastfeeding encouraged with 65 percent of babies being exclusively breastfed for the first six months of life. Breastfeeding also tends to continue until after the second birthday. It isn’t unheard of either for ‘mother’s milk’ to be enjoyed by dads, chugging down a glass with their breakfast that their partner has expressed for them. In poor neighbourhoods, breastmilk is considered valuable and is traded for necessities like bread and eggs. In the Philippines, a ‘Milk Code’ requires that breastfeeding is encouraged for babies up to the age of two years old or beyond. Under the same code, it is illegal to advertise infant formula. To encourage good milk supply, broken papaya leaves and sugar cane stalks are stroked over the mother’s breasts in a special lactation ceremony.

The previously HIV-laden country has the highest breastfeeding rate in the world, with 90 percent of mothers breastfeeding. At one point, it was estimated that 100,000 Rwandan women were suffering from HIV/AIDS. Thankfully, the tide seems to be turning in recent times. The United Nations has taken many steps to ensure mothers with the disease are taught to use proper HIV medication, which makes it possible to breastfeed babies for 18 months. Additionally, working mothers are given an hour of paid time off work every day to give them a chance to feed their babies directly. 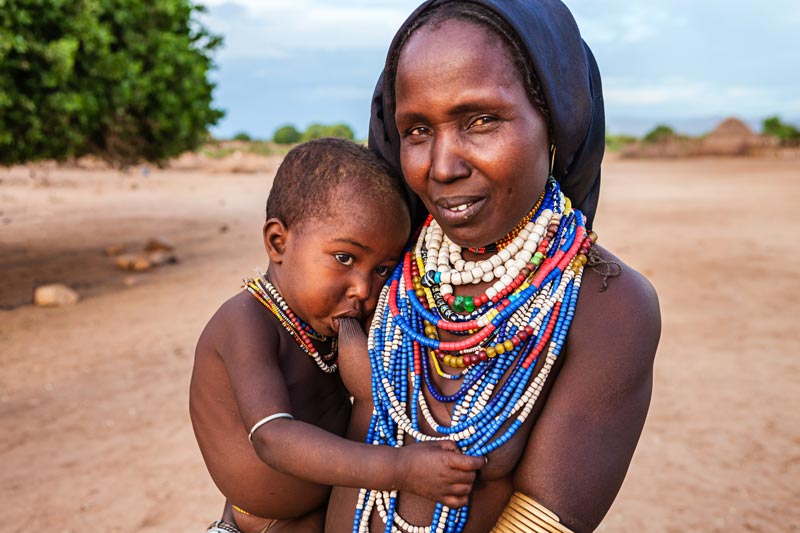 According to the World Health Organisation Global Data Bank on Infant and Young Child Feeding, the average age of weaning in Bangladesh is 33 months (2 years and 9 months). What’s more, 95 percent of one-year-olds are still being breastfed, as are 91 percent of two-year-olds. In some Bangladeshi cultures, the introduction of solid foods is celebrated by giving a baby six rice grains to mark the occasion.

In Australia, 96 percent of mothers initiate breastfeeding, according to a National Infant Feeding Survey. However, less than half (39 percent) of babies are still being exclusively breastfed by three months and about 15 percent by five months, according to the Australian Breastfeeding Association. This puts us quite low on the list of countries who breastfeed their babies beyond the newborn stage, which is quite sad. In parts of India, colostrum used to be discarded and viewed as a sign of infected breastmilk – mothers would actually express this milk and throw it away! Thankfully, this doesn’t happen so much anymore, according to one study. That said, India ranks poorly in regards to breastfeeding practices overall. Public breastfeeding is still frowned upon and only 44 percent of women are able to breastfeed their infants within an hour after delivery.

In strict Islamic regimes, like Iran and Saudi Arabia, breastfeeding in public is forbidden. On the flipside of this law, breastfeeding is also seen as a religious duty. The Quran specifies that babies should be breastfed by their mothers or a wet nurse for approximately two years. That said, the majority of mothers breastfeed for six months and then introduce bottles, citing their breast milk is insufficient. Because of this tendency, many Saudi Arabian mothers practice mixed feeding.

For a country rich in tradition, it is no surprise that there are many ideologies surrounding breastfeeding. One of these ancient rituals is a ‘breastfeeding massage’ by a Sotomi Oketani midwife to encourage milk production. Likewise, there are also weaning rituals, one of which is to paint the breast to be off-putting to babies. Odd faces and shapes are marked on the breasts and are thought to confuse babies who are then encouraged to eat solid food and take the bottle, depending on their age. Brazil has also banned advertisements that promote formula feeding, and businesses that are rude to women trying to feed their children face fines.

All this work has made Brazil a leader in welcoming and inclusive views on breastfeeding. In 2018, there were only 292 human milk banks in the world – where women can donate their unused breastmilk to help hungry orphans, the poor, or other mums who can’t produce milk – and Brazil ran and operated 220 of them. Thankfully, that number has risen across the world – we now have 750!

In Italian hospitals, dummies, formula and glucose are encouraged right from the get-go. According to La Leche League International, a nonprofit advocacy group that aims to raise awareness and acceptance of breastfeeding, the introduction of bottles in the 1970s changed the Italian parenting culture dramatically. Although breastfeeding isn’t shunned in Italy (the Catholic church even promotes it), only 19 percent of women continue to breastfeed past four to six months, despite 85 percent being breastfeed at birth.