While night terrors are a common occurrence, it can be frightening for a parent when their child experiences one. Sarah Bunden, a paediatric sleep specialist with the Sleep Health Foundation, explains night terrors – how to recognise them and what to do if they happen.

What are night terrors?

According to Sarah, night terrors are part of a phenomenon called confusional arousals, or non-REM parasomnias, which range from mumbling, laughing or talking in your sleep, sitting up in bed, walking or running around, right up to having night terrors.

Sarah explains that non-REM is more prevalent in children between the ages of two and four than any other time in their lives. “If they’re prone and predisposed to having night terrors then that’s when they’re going to happen,” she says.

Night terrors can apparently manifest in a number of ways. “The child is usually looking agitated or frightened, the face is often looking scared, the eyes are often dazed, the body can be shaking,” says Sarah. “They can do amazing things, they look like they’re being chased by something or someone, they can talk, they can scream, they can talk in weird voices and make really weird sounds.” 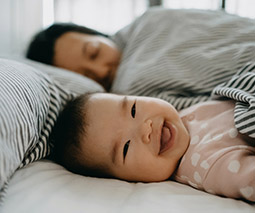 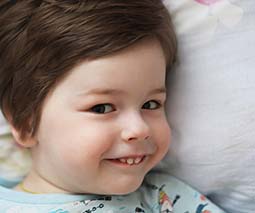 Sarah says that there’s a simple test to tell if your child is having a night terror or is simply awake because of a dream or needing to go to the toilet. “If they’re awake they will let you know, they’ll talk to you by name, they’ll respond to your conversation, they’ll do some sort of communication to indicate to you that they can see you and they want you to do something or say something,” she says. “In a night terror situation, the child will not respond to the parent. They might respond to their name, but it won’t look like it’s actually a conversation.”

If your child is having a night terror then Sarah suggests making sure your child is okay and safe and then simply doing nothing. While many parents want to comfort and cuddle their child, this doesn’t help. “That’s because, in a night terror situation, the child is not receiving the input from the environment so they’re not feeling the cuddle, they’re not feeling the love, so it’s not helping them, and in most cases, night terrors won’t be stopped by somebody giving them a cuddle or trying to help them,” she says. “What a child would often do when someone goes to comfort them is that they will push back, or they’ll scream louder or get more agitated.”

According to Sarah, one reason for night terrors is a genetic predisposition. “That means somebody in the bloodline of the child will have suffered from or had night terrors or even sleepwalking or sleep-talking,” she says.

Another reason is that the child is not getting the sleep they need. “This could be last night or it could be over a series of nights,” says Sarah. “When children don’t get enough sleep, they will do extra deep sleep the next time they get a chance to sleep, and because these non-REM parasomnias happen during deep sleep, that’s when they’re more likely to occur because a deep sleep is much deeper and more intense when we’re sleep-deprived.”

Stress is another a contributing factor and can be either physiologically or psychological. “Physiological stress would probably be a pain, maybe teething maybe a sore leg maybe a fever, it could be a full bladder or a full bowel, it could be eczema, it could be a whole range of things,” says Sarah. “Psychological stress is probably something like they were stressed when they went to bed – they might have some stress in their lives, they might be having a situation in their lives that’s not helpful and their brain is working things out during their sleep”

Should I be worried?

Fortunately, night terrors are very common and have no ill effects. “Night terrors are completely benign, they’re very developmentally appropriate and don’t have any long-term or short-term consequences if that’s what they are,” says Sarah. “Most children grow out of night terrors because that deep sleep block becomes less deep. As we get older sleep becomes lighter, and so we have less occasion to do them.”