The emphasis on role-play for young kids isn’t as big as it once was – most likely because of screens, high tech toys and parents working more. But role-playing is such an important part of a child’s emotional and social development, and here are eight reasons why.

1. It develops language and communication skills

Acting out a role different to your own, whether it’s being the mummy, daddy or someone else entirely, means children need to exercise their verbal and physical skills. But as it’s make-believe and fun play, there’s no pressure involved and talking flows more easily. When an adult or another child (such as a sibling) is participating it particularly helps enhance the activity; but you’d be surprised at how much even a really shy child will chatter along when role-playing just by themselves with a soft toy or similar object.

2. It helps them with real life situations

Little children can easily be overwhelmed or frightened by certain situations – particularly if they’re new or unfamiliar – and role-playing can really help with this. For example, acting out the first day of preschool with your child, where you’re the teacher or a fellow class mate, can help prepare them for what they can expect in real life and therefore ease their anxiety. It can also allow them to safely take risks and see what positive things come from them. Role-playing can help with situations where you’re experiencing challenges too – such as with a child who might be misbehaving during swimming lessons. With role-play you can praise a teddy for listening well and not jumping in the water without permission, something your child may take on board a whole lot better than you reprimanding them personally in public. Putting yourself in someone else’s shoes, even if it’s pretend, is a great way to understand how others might be feeling. This could be anything from a imaginative birthday party where a dolly is left out of the games, to a role-play scenario of doctors and nurses or an animal hospital. Patient or carer, it’s a great way for children to experience the different emotions that others might feel and the ways to help ease any ill feelings or discomfort. On the parent front, role-play is also great for helping adults gain a child’s perspective again too. Often we forget what it’s like to be small, constantly learning and making mistakes, so doing role-play exercises with your child can help create more patience and understanding, and therefore strengthen your relationship with them.

Role-play can be a great way to sneak some academic learning in, because when you’re playing children are generally willing, active participants.  Games such as shopping at the supermarket or working at a restaurant are great for this. Not only fun, you can encourage children to write or read shopping lists and menus without it feeling like learning. And even if they’re too young for literacy, being exposed to it is still beneficial. You can even incorporate other skills such as counting how many items in the supermarket basket or working out the different colour foods on the plate in the ‘cafe’. 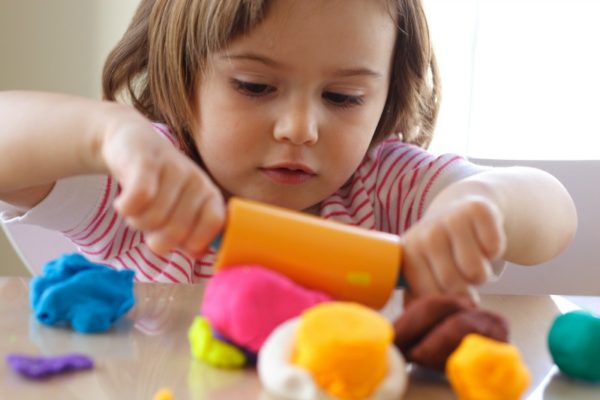 5. It sparks creativity and imagination

We live in a technological world which is great on many levels, but more often than not it stifles originality and creative play – so you need to get the balance right. Good old Play-Doh is fantastic for unleashing the potential of your child. Products like the Play-Doh Kitchen Creations Magic Oven can help your child play Mummy cooking in the kitchen or a mini Masterchef inventing tasty delights – the oven even lights up and dings when the ‘food’ is ready! Play-Doh really lets kids delve into imaginative play – and it’s also great for developing fine motor skills and hand eye coordination (just make sure they don’t actually eat any of their ‘culinary creations’!).

6. It develops social skills via collaboration

When children are in a safe zone role-playing, they’re a lot more open to bold social interactions than they might be usually be. This is even more evident the more people are involved (whether adults or other children), because through creative play they’re forced to discuss scenarios, work out solutions, take turns, cooperate and more. 7. It gets them moving

Contrary to simply watching TV or playing on an iPad, role-playing gets children using both physical and mental energy – important for their development and well-being. Whether they’re pretending to be the pirate leaping around the lounge room searching for lost treasure, or mowing the lawn outside; chances are it’s going to be physical.

8. It lets them express ideas, experiment and explore

So many little ones are bursting with surprising ideas and untapped abilities, but if they’re not given the chance to let them out, you’ll never know! Role-play games take them out of their comfort zone and into new territories. They also give the chance to have a voice without fear or judgement as they find their way and discover new things about themselves and the world, with the freedom and confidence to dream as big as they want.

What role-play games do you play with your child?

(This post is sponsored by Play-Doh – buy in store or online at Kmart, Target, Big W, Mr Toys or Toys R Us)