Perhaps you, like me at one time, have a strong-willed toddler. I’m not talking about the kind of child who sometimes gives you a run for your money, particularly when overtired or after a very busy or stressful day. I mean the kind of kid who seems to want to argue that up is down, and black is white at every possible opportunity.

I had just such a child. From the very moment that she could assert her own will, she sought to do so with every single decision. Bedtime? No thanks, she wasn’t interested. Dinner? Not unless I met a very stringent set of expectations regarding colour, texture and which portions touched other portions. Getting into the car? Absolutely not – especially not with help. When lifted into the car, she would wriggle and squirm and slide out again as fast as her chubby little legs could carry her, all while loudly proclaiming: “I do it MYSELF!”.

There are lots of words to describe life with a little person like this. Right up the top of that list are FRUSTRATING and EXHAUSTING – two words which dominated my thinking for at least the first four years of her life. She could also be delightful – she was funny and intelligent and affectionate too – but underlining it all, in big bold letters, was her most defining characteristic – STRONG-WILLED.

I regularly felt like I was right at the end of my rope. Decisions and activities which were simply a normal part of every day with my other two children became major events and challenges with my strong-willed toddler. One day on an outing to Taronga Zoo, as I walked very slowly down the enormous sets of steps towards the front entrance (my daughter insisting on jumping – slowly, and with both feet – on every single step) an elderly lady coming in the other direction looked at me with a wry smile – “That strength of character will be an asset when she’s older!”, she confidently asserted.

Was it encouraging, as I struggled simply to get to the entrance of the zoo?

No, not at all! Older? What use was that to me? I was wrestling with every single moment of every single day of my sleep-deprived life! I needed reasons to persevere RIGHT NOW!

But nevertheless, that strong-willed toddler IS now older, and that lady at the zoo was right. She is the easiest of all my kids to parent right now – and it’s her strong will that makes it so. Here are five reasons why.

When my daughter was about four, she pushed a bead up her nose, leading to a late night trip to emergency. It was removed with a horrific kind of instrument that looked like a long, terrifying crochet hook, which the doctor pushed so far up her nose I thought it was going to come out her eye. She DID NOT FLINCH. Afterwards the doctor told me that he’d never performed that procedure on a child her age before without having to sedate them. As soon as he was finished, she bobbed up off the table like a cork and cheerfully asked to be taken to McDonalds.

2. She won’t be pushed around

When she was a baby she wouldn’t let me push her around (quite literally – she was constantly trying to get out of the pram and walk places on her own) and now she won’t let other people do it either. Specifically, while other kids seem to bow to pressure to behave a certain way, from friends or kids they know, she forges her own path. Even at quite a young age, she doesn’t seem to need the approval of her friends and the people around her in a way that makes her go against her own will.

3. She has staying power

The same amazing stamina that gave her the ability to resist all my attempts at sleep training now means that she will hang in there with any task until the bitter end. I don’t have to beg and plead with her to keep going and not give up – giving up is simply not in her nature. 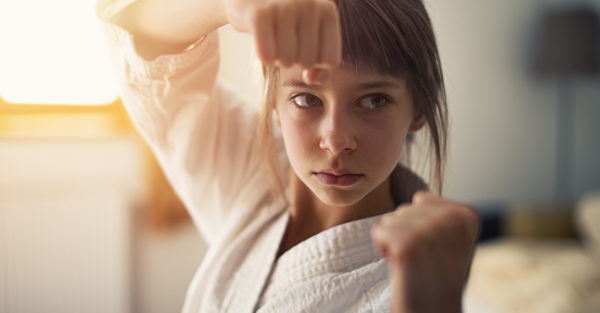 Like all kids, her feelings can be hurt and she has bust ups with friends and days when things aren’t going her way. But she’s not a moper. When she decides to shake a bad mood (and here’s a proviso – she does need to decide to shake it!) she can do it quickly and be back to her usually cheerful self. Her sense of self-confidence means that other people’s slings and arrows don’t lodge for long. She trusts herself too much for that.

5. She is a self-starter

Got a group project to do? My girl is the one you want in your group. In the time it takes my other kids to locate their pencil cases and drag themselves to a desk, she will have already mind-mapped an entire assignment and started researching it. When she was in Year 1, she insisted on creating an entire PowerPoint presentation on some random Australian marsupial and delivering it to her teacher at school on a thumb drive, even though we soon found out no such project had been set.

So if you have a strong-willed toddler, don’t despair. Brighter days are coming. The minutes and hours of your time together at the moment may well be trying (and that’s an understatement, I know!), but the very thing that makes your time together challenging can be an incredible asset later on. That little person who won’t do anything you ask may well grow up to be a world-changer.

You just have to not kill them first.