Danish actress and model Brigitte Nielsen turned 55 last week, less than a month after she gave birth to her fifth child. Sorcery or just plain luck? With more female celebrities now having children in their 50s it begs the question, how realistic is it actually for others wanting to do the same?

The star of Rocky IV and Beverley Hills Cop II, Brigitte Nielsen, shocked the world recently by debuting her blossoming baby bump on social media at the ripe age of 54. Already a mother to four adult boys aged 23 to 34 from previous marriages, this is her first baby with her fifth husband of 12 years, 39-year-old Italian model Mattia Dessi. The pair since welcomed their gorgeous little girl Frida into the world on 22 June after a long IVF journey spanning ten years.

While more women (especially celebrities) are having babies now in their 40s, the next decade is another feat altogether. Yet surprisingly Brigitte isn’t the only one. Singer Janet Jackson had her first baby last year at age 50, the same age that singer Sophie B. Hawkins was when she had her second child in 2015. Film director Martin Scorcese’s wife Helen Morris conceived their daughter Francesca in 1999 at age 52, and famous photographer, Annie Liebovitz, was 51 when she had her daughter Sarah in 2001.

So how is this possible?

It’s quite widely known now that a woman’s fertility starts to rapidly decline after the age of 35, with the chances of falling pregnant naturally after the age of 45 less than one percent. So how are these women doing it? Well in some cases it can actually happen naturally. Years ago when contraception wasn’t widely used, it wasn’t that unusual for a woman to have another baby while going through perimenopause (the stage before menopause), with the oldest recorded spontaneous, natural pregnancy being at the age of 57.

For the majority of women having babies in their 50s though, they’re getting help. Lots of it. It’s unknown whether Brigitte Nielsen used an egg donor as part of her IVF treatment (like Aussie TV presenter, Sonia Kruger, did at the age of 48). However, she would have definitely been on fertility hormones, and it would have helped that her partner was younger at age 39. Others may be using frozen eggs or embryos, like Sophie B. Hawkins did, conceiving her second daughter from an embryo frozen 20 years prior. And many also end up using surrogates. 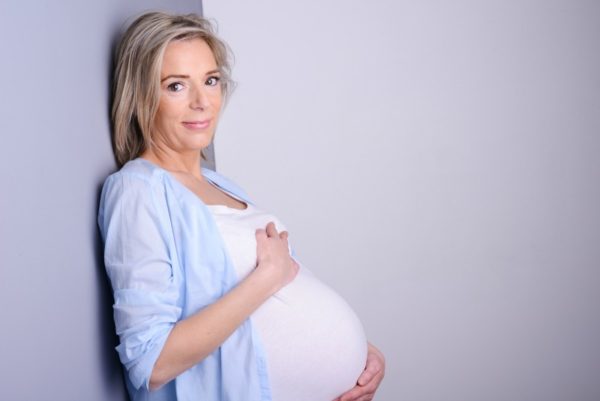 If you’re in your fifties, whether you’ve fallen pregnant naturally or used IVF or donor eggs, it definitely is a miracle but will be classed as a high-risk pregnancy. Some of the health concerns include:

However with the right medical care, proper mental and physical wellbeing management, and delivery by c-section (which is deemed safer for older mums), it’s still possible to bring a healthy child into the world once you’re past the half-century mark.

It’s not just health concerns for older mums too though. Many women who have babies later in life face scrutiny socially, with Brigitte copping a fair amount of criticism lately for being ‘too old’. She even admitted to People that she’s worried about taking her daughter to school when the time comes, in case people think she’s her grandmother and it makes her daughter feel bad.

In spite of this though, Brigitte says she feels young at heart and in the best place of her life now she’s had her daughter. Considering how many men have children in their 50s, 60s and even older, Brigitte is right in saying you should “never give up” if motherhood is something that you really want. You’re probably just going to need a lot of medical help and a ton of patience. A healthy bank balance surely can’t hurt either.