If you think pregnancy will always guard you against pregnancy, you might want to think again. (Wait, what?!)

Mother Nature has a little bit of up-the-duff funny business tucked into her sleeve, and we’re quite convinced she’s officially lost the plot.

A rare occurrence called superfetation can see a pregnant mum fall pregnant yet again. To be clear, this means a double pregnancy from completely different conceptions.

Superfetation occurs when a pregnant mum’s body cleverly (?!) continues to release eggs. If she’s sexually active, conception can occur as per usual, even if she’s already carrying a baby!

It goes a little something like this: figuring she’s totally covered on the whole contraception thing, because… already pregnant, the mum-to-be has unprotected intercourse with her partner. A sneaky egg awaits her other-half’s deposit and voila! Pregnant! Again! Hurrah!

Sometimes superfetation can happen when sperm hang about for several days, and a pregnant mum ovulates unexpectedly, too. Semen will find a way (sometimes)

Scientific American describes superfetation in these (quite unhappy, disbelieving) terms:

“Ovulation must take place during an ongoing pregnancy, semen must somehow find its way through the blocked cervix to the oviduct, via the occupied uterus and finally, the conceptus has to successfully implant itself in an unsuspecting already-occupied uterus.”

They seem as pee-d off about the semen-will-find-a-way phenomenon as we are.

These pregnancies might have different conception dates, but superfetation babies seem to be born at the same time, much like (most) twins.

The internet is dotted with strange-but-true superfetation stories. Most of them feature mums and dads with very, very shocked faces, steadfastly coming to terms with their surprise babies.

UK siblings Ame and Lia Herrity were conceived three weeks apart to parents Amelia Spence and George Herrity in 2007. Amelia was on the pill, but that didn’t stop these babies from making their way into the world.

“It is hard to get our heads around the fact that I was pregnant with two babies at the same time and they aren’t twins. When I explain it to people they get very confused.” Amelia told the Daily Mail. 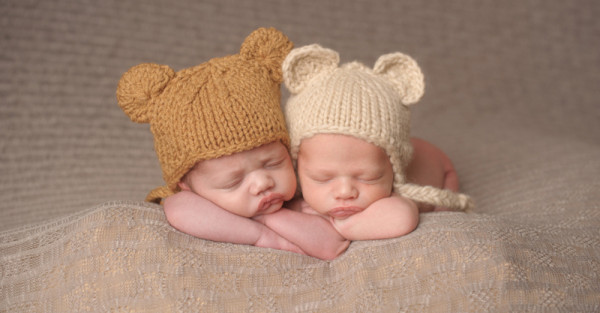 Harriet and Thomas Mullineux were also conceived three weeks apart. They were born in the UK in 2007 to mum Charlotte and dad Matt. Charlotte was pregnant with twins when she sadly found out she’d lost one baby. Two weeks later, her medical team discovered a new, second pregnancy. She was pregnant with two babies again.

“I was disappointed I had lost one of them but was more concerned about the other one,” she told Fox News.

“Those two weeks were agony for us. When I went back I was astonished when they said there was another baby. It turned out the blob that was on my last scan picture had grown into a baby.”

Brisbane couple Kate and Peter Hill also conceived their babies via superfetation. Their girls were conceived ten days apart – but from the same ‘loving encounter’. Peter’s sperm was super long-lasting and Kate ovulated again after her initial conception. Charlotte and Olivia were born happy and healthy in 2015.

So there you go! Granted it’s rare, but it’s worth knowing that having a bun in the oven may not protect you from pregnancy. Shudder. Forewarned is forearmed, right?!