Whether you are ready to become a parent for the first time or you want to add to your tribe, you probably don’t want to advertise the fact you are trying for a baby.

Once you and your partner have made your mind up, it may not happen straight away and that is when your creativity as a couple can be tested.

Plenty of people will be happy to pry into whether you want children – or more children, but how many really want to hear you say, ‘Sorry, I can’t come to your wedding, my fertile window opens that day’?

Whatever you reasons for keeping your baby-making plans on the DL, the quest for a baby can really unleash your sneaky side.

We all know how babies are made right?

Even though IVF ended up being my path to parenthood, I know how it should happen when nature decides to cooperate.

The years my husband and I spent trying to conceive before seeking help from fertility treatments were a mix of frustrating, hilarious and totally embarrassing moments.

Cotton boxers in, satin out

My early research into improving our chances to conceive told me sperm does not like the heat so, after a short discussion, hubby agreed to give up his cartoon covered satin boxer shorts for the grandpa print cotton alternatives I had dutifully purchased for him.

Even though he already felt like he’d thrown out his youth with his satin boxers, when my parents came to stay and my mum mixed up his boxers with my dad’s after doing a load of washing, it really confirmed his old man status. To his horror.

When trying for a baby becomes a chore, you start looking into what you could be doing wrong. It is about this time, your fertile window becomes your new obsession.

This window only opens once a month and you can guarantee it will be the one day on the calendar that everyone chooses to hold whatever event or occasion they are planning.

At first you might let a couple of windows open and close, but soon the mantra becomes ‘just do it’.

We went from always being early or on time to events, to being fashionably late. Our excuse? Bad traffic, car troubles and even the snooze button.

And when showing up late wasn’t an option, we came up with countless excuses to leave early or duck away for a bit.

Giving up alcohol is a bigger deal for some than others.

As two people who rarely drink, my husband and I didn’t think it would be noticed. We were so wrong.

How naive we were not to realise that every married couple without children, especially when they’ve been together since high school, is automatically on baby watch.

I soon realised the moment you decline an alcoholic beverage offering, you skip straight from trying for a baby to being pregnant in everyone’s eyes.

It’s okay though. I also found out no one, at least no one I know, bats an eyelid when you eagerly volunteer to be designated driver. 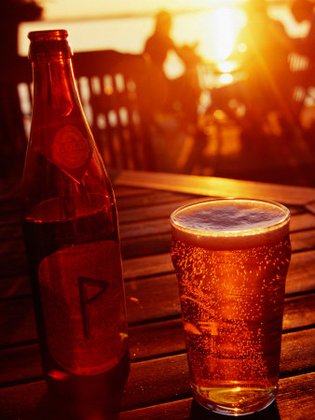 Alcohol slows down everything, including sperm, so my husband was careful not to have any alcohol in the two weeks leading up to my predicted fertile window.

But he was not so great at remembering when that was, without help.

I remember this really awkward moment where my father-in-law innocently asked my husband if he’d like a beer.

The sheer panic on my husband’s face as he looked at me was priceless because he didn’t know how to answer.

He was looking at me to see if now was an okay time in my cycle for him to have alcohol.

When what it actually looked like was that he was so under the thumb of his controlling wife that he had to seek permission to have a drink with his dad.

No spa for you!

While we are on the whole controlling wife scenario, I remember another time where hubby innocently accepted an invitation to unwind in a spa at his parents place.

Before I could process my thoughts, words were coming out of my mouth: ‘No, you can’t! I mean, I don’t think that’s a good idea’.

At that point I decided it was easier to surrender to my new reputation as the controlling wife, and list all the things I needed his help with right at that moment, rather than reveal our baby trying plans.

We would love to know the lengths you went to when trying to hide the fact you were trying to conceive.