No two women are the same and while the female anatomy is geared for baby-making, it isn’t always that clear cut.

For your own sanity, it can help to keep in mind how complex the whole reproductive process really is – and sometimes it can take time to work!

Personally, it wasn’t until I explored my own infertility that I discovered it was possible to have alternating lazy and normal cycles – basically one ovary knew what to do and the other was always a late starter.

Ovulation aside, there are a myriad of reasons why the road to parenthood isn’t always easy.

1. The fertile window is real

You had more eggs before you were born than you do now! That’s right. Dr Stankiewicz says that the number rapidly declines from there.

“The maximum number is when she is a foetus, around 20 weeks in her mother’s womb and from there, there is a proportional decrease in the number of eggs/follicles,” he says.

“What most women do not realise is that it goes down quite quickly from around six to two million at birth to approximately 400,000 at puberty and, from those 400,000, about 400 will be ovulated during the rest of their lifecycle. We don’t know what causes this.”

For this reason, age is a factor when it comes to the likelihood a woman will conceive and go on to give birth to a healthy baby.

“For women, fertility doesn’t last forever and for men it deteriorates with age,” Dr Stankiewicz says.

“The quality of eggs a woman has also decreases over time.” If your cycle is regular and you’re ovulating, 60 per cent of couples will conceive within six months.

For women under 30, Dr Stankiewicz recommends trying for a year before seeking help from a fertility specialist, and six months for older women.

“A woman’s reproductive system is like a fine tuned clock, if one cog is out of place it can change things – genetics, excess hormones and so on,” he says.

“Grandma may have had no trouble because she was having babies when she was in her late teens and back then 25 was considered old to start reproducing.

“But as we put off reproduction, ovulation may still happen but the quality of the egg is not the same.”

Diet, exercise, alcohol consumption, smoking and recreational drug use are just some of the lifestyle choices Dr Stankiewicz says can impact a woman’s chances of conceiving.

“While sperm development takes about 75 days, we used to think in terms of menstrual cycles for women. But to actually get the follicle ready to pre-ovulation is also about 85 days, so everything a woman does during that time may have an impact on the condition of the egg and so on,” he says.

“Lifestyle factors are incredibly, incredibly important because that will determine what will happen.”

4. Maintaining a healthy weight can be crucial to success

Anorexia and obesity can be equally detrimental to a woman’s ovulation cycle and can, in some cases, even stop it all together.

“Ovulation is normally a fine tuned machine and therefore the greatest impact to it is weight,” he says.

“It can affect implantation and can also stop ovulation all together, and it can increase the chances of miscarriage once pregnancy occurs. 5. Think twice before getting your nipple pierced

Dr Stankiewicz says stimulation of the nipples, through nipple piercings or other means, can cause an excess release of the hormone prolactin that can cause problems for ovulation.

6. When do women ovulate?

Dr Stankiewicz says ovulation happens after the surge of the luteinizing hormone (LH), which usually occurs about 36 hours prior to the follicle eruption.

With so many different brands of ovulation tests all promising to help you in your quest for baby, Dr Stankiewicz warns they are not all equal.

A woman’s menstrual cycle is generally 28 days long and the best way to track ovulation is during the second phase of a woman’s cycle, which is the luteal phase (days past ovulation), because it is the most stable.

“Ovulation would normally happen 11 to 14 days before the onset of the next period and it is best to test between 4pm and 10pm,” he says.

The process is retrospective and can take a few cycles to pin-point the right time, but couples should aim to do the deed two to three days before ovulation to ensure the sperm is ready and waiting in the fallopian tube when the egg arrives.

You may have heard you can expect to feel a bit of mid-cycle pain or see a change in your vaginal mucus when ovulation occurs, but Dr Stankiewicz says some women also report feeling more attracted to their partners at this time. Which definitely helps in the baby-making game.

If ever you need a reason to make love all night or set the alarm for a morning quickie, trying for a baby could be it.

“One fun fact worth knowing is the LH surge happens at approximately 3am in the morning, between midnight and 8am, in two thirds of women,” Dr Stankiewicz says.

Dr Stankiewicz says studies around evolutionary advantage have found ovulation generally occurs in the morning in spring and summer, and during the evening in autumn and winter. So depending on the season, you will want to embrace your night owl or early bird persona to get the job done.

The human body truly is a marvel. Happy baby-making! 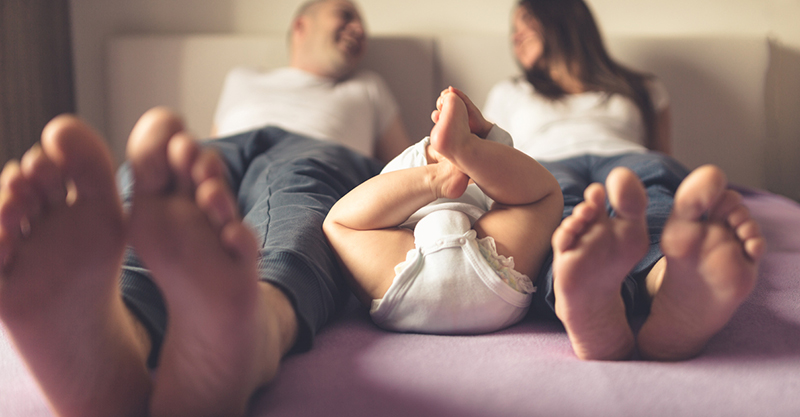