If it’s looking likely that you’ll be having a caesarean delivery for your baby but are worried they won’t get the same health advantages as a traditional birth, you might want to consider vaginal seeding. Not sure what it is? Here’s everything you need to know.

Most people are aware that when babies are born vaginally they travel down the birth canal and pick up all sorts of good bacteria (called microbiota) from their mother. Why is this important? Well, a human has trillions of these microbes on every part of their body including the skin, mouth, vagina, intestines, colon, bladder and other organs. They’re vital as they boost and train our immune system, fight infection and aid digestion.

Once a baby leaves its mother’s womb, he will come into contact with and absorb these microbes. A baby born vaginally will be exposed to all kinds of microbiota. A child delivered by caesarean, however, will only receive microbes passed from the skin of its parents (this is why skin-to-skin contact is so important) and also doctors, nurses and the hospital environment (not as friendly bacteria), which scientists believe can have an impact on their long-term health. Many feel it could actually be the reason why c-section babies tend to have more health issues such as allergies, asthma, celiac disease, obesity and type 1 diabetes. 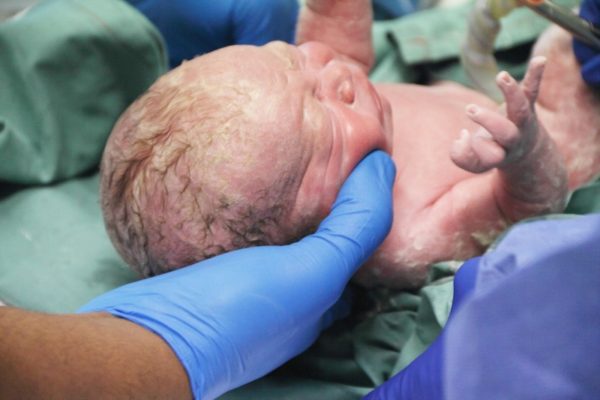 Vaginal seeding (also known as micro birthing), is a relatively new process designed to help restore the bacteria balance and transfer more diverse microbes to babies born via caesarean. Prior to birth, the mother has a piece of gauze soaked in saline solution inserted into her vagina (like a tampon) for an hour, which is then placed in a sterile container. Shortly after the caesarean, the vaginal swab is taken out by a doctor or often the woman’s partner, and then wiped all over the baby’s face (including his eyes and inside his mouth) and body, exposing him to the microbes.

What the science says

Research into the effects of vaginal seeding are still in their early stages; however, studies so far show promising results with babies who have undergone the procedure showing similar (but not identical) microbe levels to those born vaginally. Until more long-term studies prove that this actually results in fewer health issues for these babies (compared to those born via caesarean without the vaginal seeding), it’s unlikely to become a medically recommended practice. If you like the idea of vaginal seeding and are having a caesarean, then it’s best to discuss your interest with your doctor or midwife. You may find that they have never heard of the procedure (given it’s still relatively new and not widely practised). However, they should still be able to explore the option for you and help make it happen.

Unfortunately, if you end up having an emergency (unplanned) caesarean, there might not be enough time to allow vaginal seeding to take place. And it’s also not allowed in instances where the mother’s vaginal bacteria is compromised – such as if she has HIV, an STD or strep-B.

So while vaginal birth is definitely still the preferred delivery method for babies where there are no health risks or other complications, this exciting new procedure could help mums who undergo a c-section give their babies a bit more of a health boost and ease distress they may have felt from not being able to deliver vaginally.

Would you consider vaginal seeding for your baby or have you done it? Share your thoughts with us on Facebook.