Imagine going through the labour and birth of your long-awaited baby and finally making it to the finish line … only to find that you actually have to do it all over again!

Wisconsin woman, Lyndsey Altice knows the feeling. When the 30-year-old mum of one went into labour with her second child, she had no idea of the surprise awaiting her.

After hopping into the birthing pool to deliver her much-anticipated little girl, named Ada Maze, Lyndsey only had a moment to enjoy her achievement before feeling another very large contraction hit. It was at that moment she knew her job wasn’t yet done.

“I was immediately suspicious when Ada came out so small,” Lyndsey explained when she shared her story with LADbible. “I had put on double the weight I did with my last birth so I didn’t understand how she could be so tiny. There are no words to describe what I was thinking when I realised I was about to have another baby right there and then.”

After a very short labour with the little Ada, twin number two was in even more of a rush, born just two minutes after her big sister.

“The next contraction was almost instant, I knew before the nurses started saying what they thought it was, I could feel the baby coming but could not communicate it through the contraction … Then I felt it happening but I couldn’t get the words out, I knew a second baby was coming and then two minutes later there she was.”

“The whole room went crazy, everyone was having conversations with each other, my husband was in shock, my sister was taking pictures and I don’t think any of us had a clue how to feel.

“I was in pure shock too, I had a million thoughts that I couldn’t process because I was completely overwhelmed so i just submitted to the moment.” 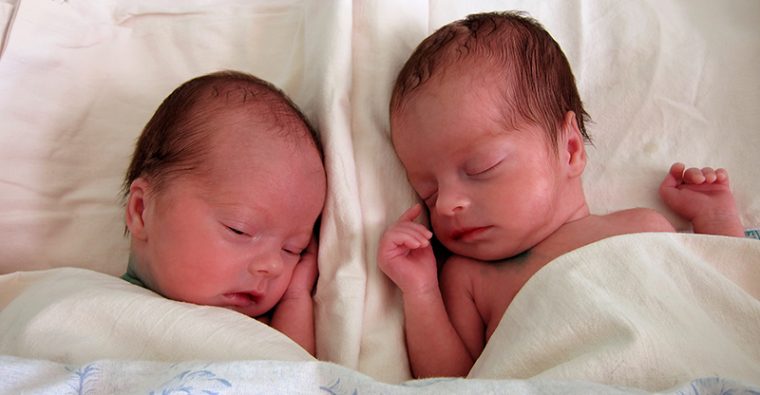 Lyndsey explained that she had no signs that she was carrying twins – her regular midwife check ups showed a normal range of growth for one baby, and an ultrasound during her pregnancy showed no sign of a second foetus even when they checked the footage again after the surprise birth.

“I did have an ultrasound with a sonographer, who did an extensive ultrasound of all four quadrants and it still didn’t show Billie June … You just can’t see a second baby at all, so even when I look, and know she’s there, I can’t see her. When I went into labour they hooked me up to the baby monitor and there was only a reading of one heartbeat.”

The delighted mum admits that while it was a shock at first, her family have settled into twin life fairly quickly.

“When it first happened we were just having a total ‘oh crap’ moment,” says Lyndsey. “But now that we have settled and we know how to look after twins we just love it … It’s a total blessing in disguise … We are so happy, I would not change a thing.”

Congratulations to this lucky family, and welcome to the world, Ada and Billie!