First-time-mothers, think you’ll be cool, calm and collected when you bring baby home? Think again! Like all new mums, you’ll find yourself having some totally off-the-wall moments.

1. You’ll wonder fleetingly … is this baby definitely yours?!

In the first weeks (or months), you’ll find yourself bonding with your baby, and in time you’ll be able to pick him out of a 1,000-strong baby line-up. But in those initial days, many babies can look a bit, well … the same-ish. Like small, squishy potatoes.

If your baby spends any time away from you in the hospital nursery, when they wheel your little bundle of joy back in for an overnight feed and you’re bleary-eyed, perhaps a bit drugged up on meds if you’ve had a caesarean, or you’ve momentarily forgotten, hey, you’re a mum now (!), it’s totally normal to peer down at your baby and wonder – did they bring back the right one?!

The first week my son came home I scrolled through photos of him the day he was born, comparing them with the ones we took after he’d spent his first night in the nursery, relieved to see the same two little white spots on his cheek and his slightly wrinkled ear lobe in both sets of snaps!

Google will be your best friend – and your worst enemy. “What should baby wear when nursery is 23 degrees?”, “At what age do babies genuinely smile?, “Is my baby sleeping too much?” Ha ha – just kidding!

Google is certainly a godsend when you’re parenting for the first time; I honestly don’t know how pre-internet mothers did it. I suppose they all had well-worn copies of What to Expect When You’re Expecting on their nightstands, and wise elders who passed down their maternal wisdom. But when you’re wanting a quick fix for your baby’s cradle cap, or curious about when you may expect a particular milestone, Google is of course, invaluable.

If you find yourself googling, “Can babies just not wake up?” though, it’s time to put the iPhone down. 3. You’ll spend a lot of time “shh-ing” your poor partner

You’ve been pacing the bedroom with your infant for over an hour, bub finally looks drowsy, and you ever so gently place him in his cot, praying his little eyes don’t spring open the moment his head hits the mattress.

You close the bedroom door behind you, let out a satisfied sigh and mentally pat yourself on the back for acing motherhood … and then, your completely clueless significant other ever so innocently drops something on the floor/closes a cupboard a bit too forcefully/breathes.

It’s unlikely your baby will wake up – they can sleep through an incredible amount of background noise throughout the day after all – but it’s the mere thought of all your good work – the patting/rocking/shh-ing – that will have you whisper-yelling at your partner “Shhhh!! You’ll wake the baby!” if he so much as sneezes.

If you were somewhat of a sartorialist before you kissed your dresses and heels goodbye in favour of flaties and breastfeeding-friendly tops, dressing bubs will definitely be one of your more enjoyable mum duties.

Keeping track of who gifted you what and ensuring bub is in said outfit when those visitors pop by will seem crucial, as will ensuring your baby wins “best dressed” at mother’s group.

Before you know it, he’ll be demanding they dress himself and pairing green gumboots with a Superman cape, so kit him out in the cutest stuff you can while he can’t object. 5. You’ll stare down strangers on the street who look like they’re getting too close to the pram …

… and shoot daggers if they happen to be smoking.

When I ventured outdoors for the very first time for my newborn’s maiden pram voyage, the world suddenly seemed a little threatening.

I felt the enormous responsibility of protecting this helpless little being and warily regarded well-meaning strangers who peered down at my son, some of whom even reached into the pram to let his pudgy hands grip their fingers.

After a couple of near-collisions, I’m now a pro at steering clear of anyone who looks like they’re heading our way with a lit cigarette, and learnt that draping a muslin wrap over the pram is a great deterrent for overly enthusiastic strangers wanting to pinch bub’s cheek.

In those early days, having a shower, washing your hair and getting out of your pjs may feel like a huge achievement. No matter that you’re piling your wet hair into a topknot and throwing on that must-have Mama Bird t-shirt from Etsy that all the Instagram mums seem to rock.

While this look is totally appropriate at home with bub, you’ll know you’re a bona fide “brand new mum” when, as you’re halfway out the door with the pram, nappy bag and a suddenly screaming baby, you look down and think, “stuff it”! 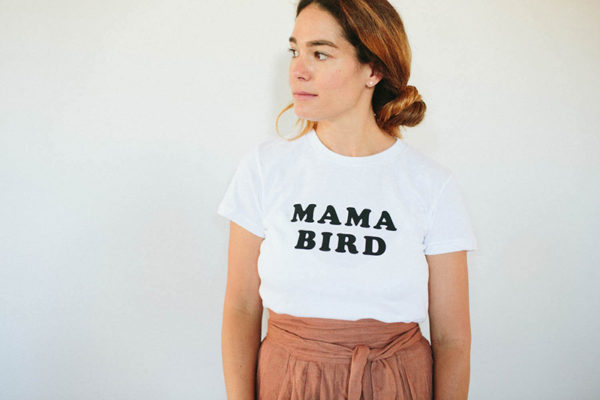 7. You’ll be a teensy bit terrified

When they’re awake you’ll be a tiny bit terrified they won’t ever go down, and when they’re down, you’ll have more than a couple “Are they breathing??” moments.

When you become a mother you basically sign up to a lifetime of worry – ‘Is my baby happy? Healthy? Hitting his milestones?’ will run through your mind on a steady loop – which can be terrifying. Keep in mind though you’re also signing up to endless beaming smiles, gorgeous cuddles and a love that is boundless.

Nothing terrifying about that.