A photo of a clever cleaning hack is being shared widely across Instagram and Facebook and it illustrates how putting toys ‘in jail’ can help kids learn to tidy up.

With all that clutter from the holidays, you’re probably tired of picking up the toys around the house by now. – What a great time to teach the kids how to pitch in and do chores around the house. They won’t want to of course but if you create a toy jail, you’ll come out on top! – What are your favorite sneaky ways to get the kids to pitch in? – #mom #mother #mommy #motherhood #momlife #candidmotherhood #motherhoodunplugged #specialeducation #specialneeds #specialneedsmom #momofboys #momofgirls #singlemom #momoftwo #momofthree #momoffour #supermom #autism #dyslexia #dyscalculia #workingmom #parenting #parents #parenthood #momproblems #parentproblems

A post shared by Servidio Education Solutions (@servidio_education_solutions) on Dec 29, 2018 at 9:15am PST

“I’ve got your stuff”

The idea is to create a ‘jail’ from a big box or plastic container and pop your child’s toys in it if they keep refusing to clean them up.

In the image the ‘jail’ has a little poem written on it, explaining how the strategy works in a very rhyme-y way.

“Toy Jail,” the poem begins. “You left it out and I picked it up, I’ve got your stuff and you’re out of luck, to get it back please do a chore, then it’s yours just like before.”

Parents responded with enthusiasm to this simple hack.

“Love this!!!!!!! We do time-out for toys. Jail is even better,” one inspired parent posted.

“Great idea but don’t think I have a container big enough,” another Instagram user joked.

Others already did that, but took it to the next level.

But one commenter questioned if this would work at all, considering that kids can just lift the lid and retrieve their toy.

Someone replied that kids should “obey” their parents, so this trick works just fine for those amazingly well-behaved sorts of kiddos!

It seems that lots of parents are keen to try this idea, and many are already on the case.

Saw this idea on a Friend’s Facebook page earlier today and since I had to run to @walmart I decided to grab a bin for the boy’s toys… the first victim is this dreadful poop pillow (my mother bought it ?), but Jae said it’s not fair because Jack didn’t have a warning 1st and while I agree (didn’t tell him lol) it’ll be a fun warning when he wakes in the morning. #ImDyingToMakeACuterOne #ToyJail #PickUpYourToys #LoveMommy #SweetJoLife

Indeed, some parents have taken the Toy Jail idea even further, creating printable Bail Bonds to help allocate the chores that kids do to get their toys out of jail. 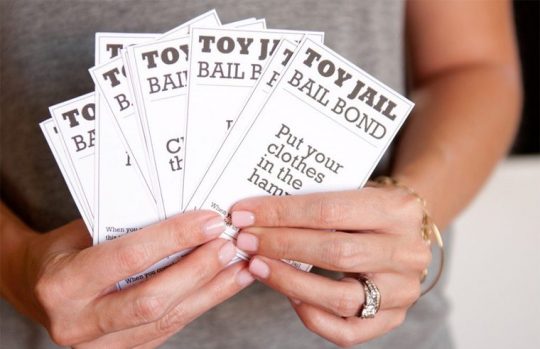 (Find these bail bonds at The Chic Site if you’d like to print them!)

Blogger Mommy Ops has used the Toy Jail strategy with her five-year-old daughter and detailed the results on her blog, noting that it had helped speed up the family’s morning routine.

“It took about two weeks, multiple toys, and multiple chores for her to get the point,” she writes. “But now we haven’t had to use toy jail in about a month.”

“She’s better at getting ready in the morning, she’s better at staying on task, and she’s better at understanding the consequences to her actions. Keep in mind she’s only five, so we like to encourage her to be her own person and to take ownership of her actions through routine and structure.”

Perhaps Toy Jail might be a useful strategy at your place?! If you love this idea, check out this mum’s hilarious ‘f*cket bucket’ cleaning hack that takes the mum-sass one step further!