In some of the most exciting news of the week, parents can now share the wonders of Castle Greyskull and the brilliantly bobbed He-Man with their own children.

By the power of Greyskull!

Yup. Toy company Mattel is bringing back rebooted versions of the original He-Man toys and fans of the popular ’80s cartoon are relentlessly humming the earworm theme song in celebration. Possibly.

Gizmodo reports that Mattel will release a new Masters of the Universe Origins Line, starting with He-Man and Skeletor and they’ll hit the market … in 2020.

“The new figures still stand about 5.5-inches tall, and feature the same incredibly buff builds and bulging muscles as the ‘80s figures did, but with some updates made possible by 37 years of advancements in toy manufacturing,” Gizmodo says.

For starters, the rebooted toys will be MUCH more extensively articulated meaning they’re capable of many more important MOTU pro moves.

“Children of the ‘80s had to make do with just six points of articulation on their MOTU figures, resulting in some stilted battles between He-Man and Skeletor,” Gizmodo says.”

“The new Origins line now features 16, allowing He-Man to finally raise his sword high into the air when calling upon the power of Castle Grayskull.”

Let’s pretend! 7 of the best role-playing kits for preschoolers

Perhaps your preschooler would like their own play food charcuterie board?

Gosh, that will be very liberating for He-Man, won’t it?

The toys will be a little more refined in some other ways too apparently, with more sophisticated face sculpts and more detailed paint jobs to bring these characters to life. 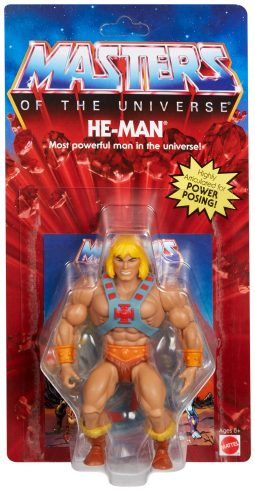 This is all very exciting news for MOTU fans who want to pass on their enthusiasm for He-Man with their own kiddos.

Now let’s revisit that aforementioned theme tune because it’s honestly one of the ’80s best.

You can read more about this reboot at Gizmodo.