The other day my friend’s husband had a vasectomy. Also known as ‘the snip’, a ‘flop ‘n’ chop’ or a ‘buying frozen peas’.

When I ran into her at the shops she told me he wasn’t doing too well. It was day three and he was still wearing two pairs of loose undies, one with a few frozen peas in a zip-locked bag down the front.

He was also resting up and not leaving the house.

When I commented that it must be a bit painful, she eye-rolled. But then she had just eight weeks earlier given birth to their third baby. A birth that had made her tear more than her other two and while he’s resting, she’s been up breastfeeding all night and tending to their other two kids in the day.

Needless to say she didn’t have much sympathy.

I joked that she should get him one of these Etsy vasectomy cards as a bit of a giggle. Because when you can’t cry, you gotta laugh. card above and below via Teddy Perkins 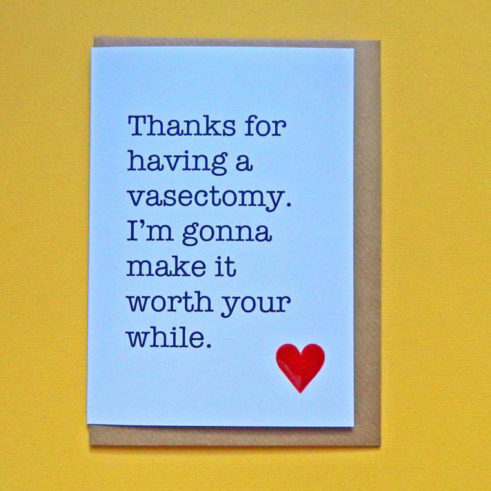 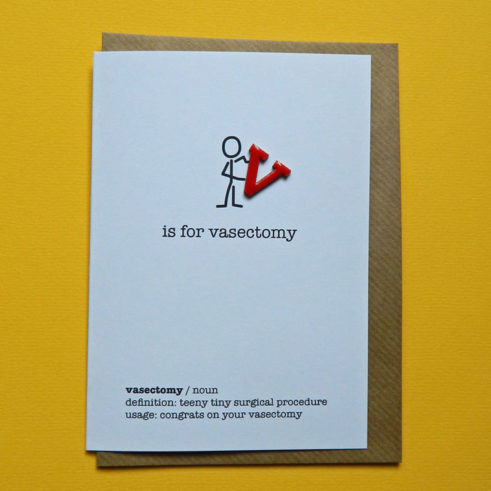 card above via Teddy Perkins 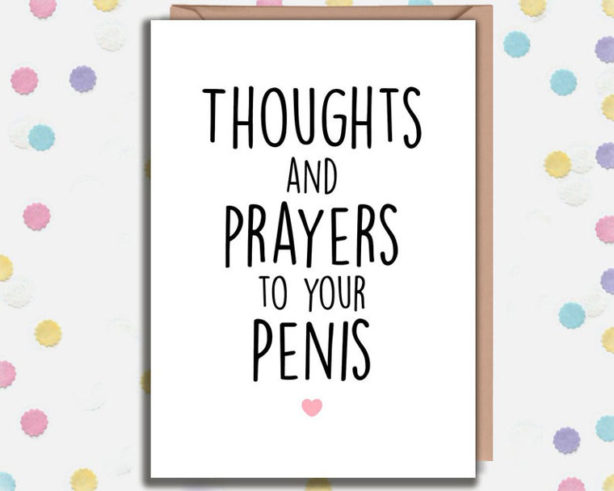 cards above and below via CuteEXE 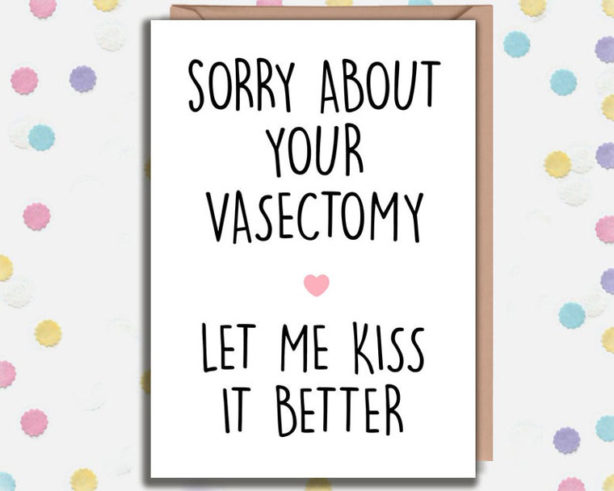 cards above and below via What The Duck While my friend, again, understandably, has a different pain threshold to her hubby right now, I did a little research into how painful a vasectomy really is.

In short, the keyhole surgery is said to be “relatively painless” when it is performed under local or general anaesthetic.

If under local, your man will feel the anaesthetic injection and he also might feel some tugging as the tubes between the penis and scrotum (called the vas deferens) are cut and blocked to prevent his swimmers from leaving the testicles diving block for any more races.

But the recovery pain really does vary. Generally speaking, your bloke will feel some discomfort or pain after his, but he shouldn’t be in terrible pain.

So it’s not like  being kicked in the balls according to another friend’s partner who had a vasectomy last year. He tells me, “it felt a bit bruised and it was swollen for a few days, but it wasn’t too bad.”

Still, the total recovery is more like a few days rather than hours. Your man may feel a little sore and sorry in his nether regions. Thankfully, pain meds and frozen peas are at the ready! A ‘thinking of your penis” card may also help.

A vasectomy, while being a minor procedure, is a very big deal in terms of what it signifies. Not only does it mean your family is complete, it also means NO MORE CONTRACEPTION! EVER!

And that is something to celebrate.

So get him the card, and maybe bake him a vasectomy cake (because yes, that’s a thing), too.