I’ll never forget the moment my husband and I found out we were going to be parents to three girls. We were sitting in a fancy restaurant and we were each nervously holding an envelope in our hands.

We’d asked the ultrasound technician to write the sexes of our twins on two pieces of paper and to insert the papers into separate envelopes. We’d done this when we were pregnant with our first daughter and we’d loved the experience.

“I love my family”

As we sat there looking at each other with big dumb grins on our faces, we were thinking the same thing: please don’t let it be two girls. I know that sounds awful, but I can explain.

We already had a very spirited daughter who was putting us through our paces at the age of two, so two more girls seemed like … a handful. But more importantly, we worried about how her life would be affected by having twin sisters. We didn’t want her to feel slighted or overshadowed by the new Frozen fans on the block.

Spoiler alert: my hubby shoots X darts. We laughed and cried when we realised our fate, and about five minutes later we felt calm and joyful. We were going to have three girls and it would be awesome.

Fast-forward three years and my eldest is five (“and-a-half, Mum!”) and my twins are three. If I could go back and change one of those bits of paper to say “boy”, I would NEVER. I love my family … even though they drive me crazy every single day.

Here are a few pros and cons of having three girls … 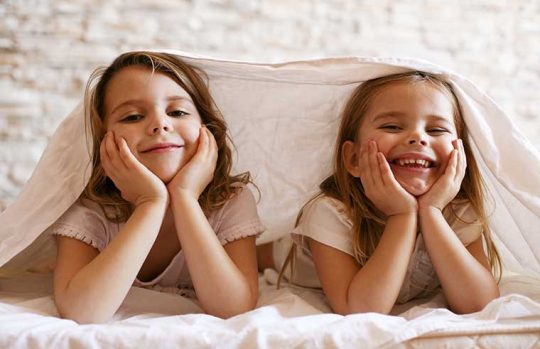 Pro: They play the same games

If you drop by my house on any given afternoon, you’ll probably find my girls colouring and crafting at the dining room table. Or they may have decided to take a break from their art to play Mummies and Babies. They’re into the same stuff and they often play together.

Con: They fight over ERRYTHANG

Because they have the same interests, they always want the same toys and “treasures” at the exact same time. If one of them discovers a long-lost baby rattle that no-one has cared about for years, the other two will immediately attempt to declare ownership of it. It could even be an old sticker found on the bottom of a shoe or a piece of broken plastic uncovered at the park – if it’s “new”, they all want it. And they will engage in an epic battle to claim it.

Pro: They like the same movies and TV shows

Con: They can NEVER agree on what to watch

I think it’s because their default setting is “cantankerous”. One might suggest watching Frozen and the other two will pipe in, “Yeah, Elsa!” But two seconds later, one will inevitably realise she’s being – gasp! – agreeable and change her mind. “No Elsa! I want Peppa!” “Nooooooo! I want Elsa” and so on and so forth till I lose my bananas and threaten to throw away the TV.

When I buy a piece of clothing for my eldest, I know it will be worn into the ground by all three girls. And friends give us bags full of hand-me-downs that my girls share without a fuss.

Con: They do 43 costume changes a day

We have so many clothes that they’ve taken to changing numerous times a day because: fashion, darling. And don’t get me started on all the costumes hanging on the costume rack. My mountain of washing is absurd. I don’t know how to make them stop. 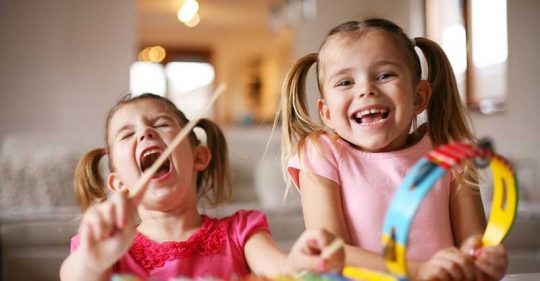 Pro: They can be so freaking cute together

When they think I’m not looking, I catch them holding hands, cuddling up together in the bean bag to read books or comforting each other after a fall. I even hear them complimenting each other on their drawings (“Oh, dat’s bootiful!”) and using all the polite words they refuse to say to their parents. It makes my heart melt into a puddle and I momentarily forget that I was ready to run off and join the circus five minutes earlier.

Con: They spend most of their time screaming like a herd of wild banshees

For each sweet moment, there are 46 horrifying ones. When they turn against each other, they’re capable of screaming at a decibel level previously unknown to man. The noise levels in my house would absolutely exceed OH&S standards.

Neighbours make polite jokes about it. Guests unsuccessfully attempt to mask horrified facial expressions. This is some serious eardrum-rupturing shizz I’m talking about. If I’m honest, this is my least favourite thing about my family. I have NO idea where any of them get it from *cough*

Oh, and the cat bites too. Can’t win.

But despite it all, I’d do three girls all over again. Because the sweet pros make all the crazy cons worthwhile.