Chrissy Teigen just shared a couple of videos of her family’s adorable ‘Candy Court’ where the mum-of-two presided over an important decision.

We already knew Luna Stephens – the daughter of John Legend and Chrissy Teigen and the sister of baby Miles – was a lolly aficionado. She told us last week that Sour Patch candy is her favourite. It seems that she’s such a lolly lover that some formal proceedings have been put in place to govern her treats.

“I now call to order the meeting of the candy,” Chrissy – who is about to star in her own Judge Judy-like show called Chrissy’s Court – begins.

“First off Luna, I would like you to speak. Tell me about why you deserve the candy?”

“I want the candy because I want it and I like it.” 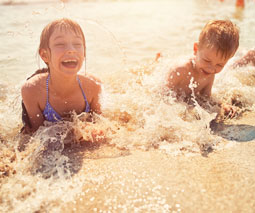 “What about one?” her mum asks.

“No, I want three,” is the firm response.

“What about … two?” Chrissy suggests.

“We have reached a settlement,” Chrissy captioned the Candy Court clip.

Too good to be true?

Now this was a very adorable exchange, but do you think everyone played nice? Nope.

One mean Instagrammer decided it was a good idea to focus in on Luna’s appearance.

“Finally someone brushed her hair,” that person wrote underneath the clip.

“@kmolleda all by herself!” Chrissy shot back at the mean lady. “Maybe she can come do your makeup.”

It’s not the first time Chrissy’s had a cheerful crack at social media critics and we’re sure it won’t be the last.

“I think you can respond [to trolls] if you’re having fun with them and make it more lighthearted,” Chrissy told Page Six last month. “I used to respond to so many things and I don’t even like it when Twitter is an angry place.”

“I’m much more able to laugh everything off, so I’ve grown a lot, we’ll say, with Twitter and Instagram,” Chrissy said.

we have reached a settlement.

And a bonus video we shall title ‘Boys are cute and girls are beautiful, now let me eat my snacks’

Luna has the very strong belief that only girls can be beautiful and only boys can be cute.