Kristen Bell has revealed her kids have imaginatively named the SIX cats they found in their garden and we’re totally HERE FOR their delightful choices.

“Oh, there are some kittens”

Most parents will have their own story of when their child showed up with a pet. Spiders in jars (shudder), the next door neighbours dog, a fallen bird, a stray lizard. Kristen Bell’s “found pets” took this concept to the next level, and while her daughters didn’t instigate the new additions, they certainly embraced them in full force.

Speaking from the weekend’s Baby2Baby Gala (where Jessica Alba also got chatty) a still-reeling Kristen detailed the proliferation of cats on her property, but appeared completely charmed by the names her daughters had thoughtfully picked out.

The actor and mum-of-two revealed she’d noticed the cats were sniffing about and thought it was a bit cute, but it quickly dawned on her that they weren’t going anywhere and the ball was in her kitty court.

“Oh, there are some kittens in our backyard,” were her first thoughts, before the gravity of the situation had fully dawned.

“They kept showing up and looking in our windows. I was like, “do I have to do something?” because these clearly are no-one’s cats. Which means they’re my cats,” she explained, looking quite rightly perturbed. 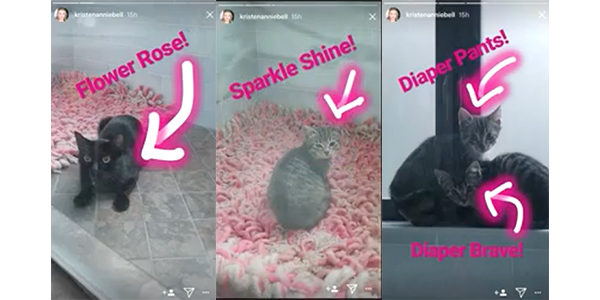 “The mother’s name is Flower Rose,” Kristen revealed, obviously chuffed. “The kids are Sparkle Shine, Diaper Pants and Diaper Brave, I Love You Too and Poopy Pants.”

“Are you keeping them?’ ET’s interviewer asked, incredulously.

“Nooooooooo-ooooowwwwhhh! What am I going to do with six cats?!” a traumatised Kristen bleated.

If you’re looking for a pet name, Delta and Lincoln’s choices are sure to inspire you, right?! 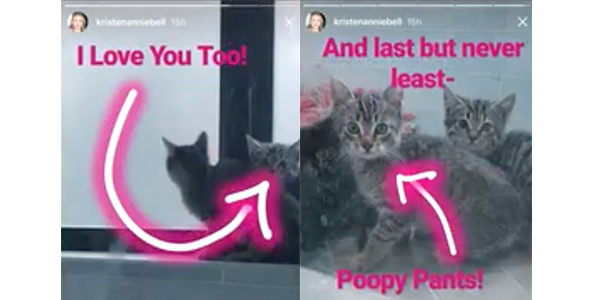 What else is going on in Kristen’s life?

Her house is a relatable mess

This is a picture of both the floor of my house and the interior of my brain. #momlife

Overheard my daughter tell another kid:"If ur parents ever get blown away in the wind, just pick up the phone & call 891."#SafetyFirst

She ate some very tiny burgers with husband Dax Shepard

Stuffing our faces at the annual @baby2baby gala!!!!

She cornered the market on red carpet cat chats

She’s appearing in A Bad Mom’s Christmas (in cinemas now!)

Being perfect is overrated. This year, it’s time to be BAD. #BadMomsXmas is now playing in theaters! https://t.co/39umUYTRfn pic.twitter.com/DU4uozcBVQ

And she’s appearing in The Good Place (on Netflix!) with Ted Danson

Off camera on #thegoodplace, Ted spends much of his time inventing ✋ signals for things he likes. This one is for "unciorn poop". (??) Also catch our on camera action tonight at 830pm on @nbcthegoodplace !