A new photo capturing four generations of the royal family has been released to mark the new year, and it’s a refreshingly cheerful one!

The long and the short of it

The image also shows that Prince George might just have officially graduated to long pants, because he’s sporting a fetching pair of tartan trousers (along with a very cute half-grin.)

The photo captures the line of succession — the Queen, Prince Charles, Prince William and Prince George — all assembled in an ornate corner of the palace. Everyone’s wearing their best outfits, shoes impeccably shined and all looking very pleased.

We usually see young George in shorts, so this transition to longer pants is something to write home about.

While George is snazzily grown up below the belt in this new snap, he’s still wearing an old-fashioned Peter Pan-collared shirt, complete with navy piping, above.

It’s the same style of shirt he’s worn previously, by English label Amaia, but sized up to fit his very rapidly-growing 6-year-old form. Evidence, perhaps, that despite the big responsibility that looms ahead, that he’s still considered a little boy first and foremost.

🎉 Happy New Year! A new portrait of The Queen and The Prince of Wales, The Duke of Cambridge and Prince George has been released to mark the start of a new decade. Wishing all of our followers a happy and healthy 2020! Photo 📷 by Ranald Mackechnie. 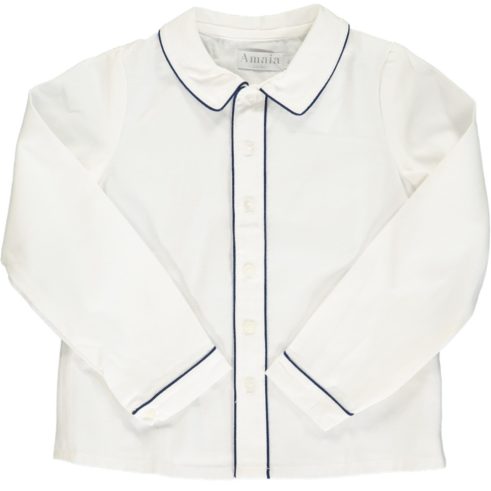 The Daniel shirt by Amaia

This is the second time we’ve seen the young heir to the throne in long pants this festive season and we’re guessing that George-in-shorts may be almost done and dusted.

The first was during an historic walk to church on Christmas Day, when both George and his sister Princess Charlotte joined their parents and met well-wishers.

You may remember that we also caught a glimpse of George in formal long pants back in 2018, at Prince Harry and Duchess Meghan’s wedding.

Happy Christmas! This morning The Prince of Wales, The Duke and Duchess of Cambridge, Prince George and Princess Charlotte joined Her Majesty The Queen and Members of @TheRoyalFamily for the Christmas Day morning church service at St Mary Magdalene Church in Sandringham. Photo 📷 by PA

The little royals had never before made a Christmas Day appearance, and royal watchers were delighted they’d been deemed grown-up enough to do so.

Charlotte was a crowd favourite in particular, with the little princess making a valiant effort to be brave as she hugged well-wishers, accepted gifts and chatted with the assembled crowd.

🎄 Merry Christmas! This photograph of The Duke of Cambridge, Prince George, Princess Charlotte and Prince Louis was taken by The Duchess of Cambridge in Norfolk earlier this year. We wish all our followers a very happy and relaxing Christmas Day ⛄️