Happy birthday, Show us your party! Can you believe it’s been three years since we began showcasing your birthday parties and baby showers here on Babyology?  Me neither. Back then we kicked things off with my son’s first birthday – a fun vintage circus celebration. So it only seems fitting to mark the milestone with his latest party. Welcome to Will’s knights and dragons birthday. Will picked the theme for his fourth birthday and was terribly excited by the whole thing, choosing the guest list himself and helping to plan the games and the menu. To set the mood, I roped in my mother-in-law to help make knight costumes for the fourteen little guests. We made red ones for the girls and blue ones for the boys, adapted from this easy-to-follow knight tunic tutorial from Prudent Baby, while the birthday boy wore a special knight costume that my own mum brought back from a recent trip to England. I’d intended to hold the party outside but a stormy Melbourne forecast and the appearance of some rather ominous black clouds forced the feasting indoors instead. The party table still looked spectacularly knightly, with gold plates and blue hessian squares offsetting the makeshift red fabric tablecloth, all from Spotlight. The fab medieval gold cups, embossed with a knight’s shield, were a Fishpond find while the black and white striped straws came from my local Reject Shop. The dragon mug – a special cup for the birthday boy – came from Novelty Shop. But the piéce de résistance were those amazing knight party hats from Meri Meri, found at Heads and Tales after weeks and weeks of searching locally. Of course, medieval knights need a royal feast – fighting dragons is hard work, after all – and I tried my best to deliver, serving up home-made sausage rolls, dragon toes (little hotdogs) and other savouries followed by vanilla buttercream-topped cupcakes, dragon and shield cookies, chocolate cannon balls, fairy bread (a birthday boy request) and enough lollies to fill a castle. The lollies were held in pretty glass jars that I originally picked up from party store Invite Me for my daughter’s fairy party. (Our regular party watchers might know they also made an appearance at her Alice in Wonderland birthday.) But back to knights and dragons. My mum made all the bunting and the perfectly matched royal blue table runner was a bargain $2 find at my local Savers. The dragon and knight shield cookies, served on my mum’s fancy silverware, were made using cookie cutters found online at Ballarat biscuit cutter company Bisk-Art. I love that these cutters are made in Australia. The cupcakes were baked in Paper Eskimo cases (my favourite brand for baking, such great quality) and topped with edible silver glitter and silver jimmies, as well as with toy knights found at Toys R Us. The little knights also made it into the take home party bags, along with very retro White Knight bars and other assorted treats. The larger knight figures atop the wooden boxes either side of the cupcakes (served on gold plates fortuitously found in the Christmas section at The Reject Shop) are from German toymaker Schleich – find similar ones at Bunyip Toys. 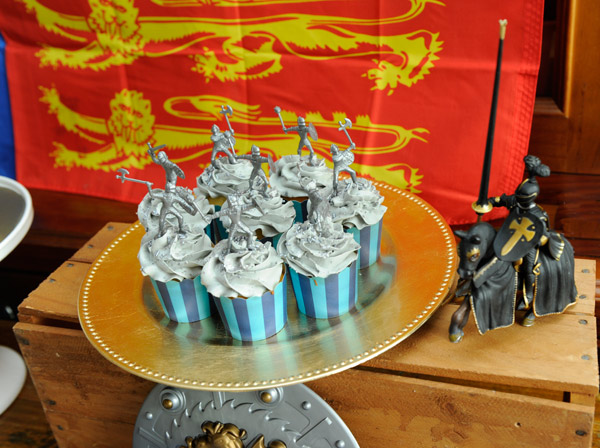 After my older son’s Lego birthday last year, I’d vowed to never, ever tackle cake pops again. But when my youngest looked at me with his big blue eyes the day before his party and asked me to “please, Mummy, please make cake pops”, what else could I do! Cue another very, very late and frustrating night trying to melt white chocolate! (If anyone has a tip to save my sanity and get a thin, runny consistency from melted white chocolate, please let me know in the comments below.) I used an Oreo pop recipe from A Little Delightful and the kids – and adults too – gobbled them up, dodgy white chocolate coating and all. When it came to the birthday cake, Will was very specific! I’d intended to make a dragon shaped cake but he was having none of that. Instead, he put his order in for a “round cake with another round cake on top and then a brave knight too”.  And it had to have “golden” candles to boot! The knight on top of the cake was a Papo figure that my mum also brought back from England, but you can find similar locally at Mini Zoo. The cake itself was white chocolate, with layers of white chocolate ganache and lemon curd, topped with Swiss meringue buttercream. My birthday baking skills  have certainly improved a little since I tackled his rather wobbly and wonky circus cake three years ago, though you’ll have to please excuse the knight’s noble steed sinking into the buttercream. Now onto the games, which came after big brother Jack knighted each guest and bestowed upon them their own sword – preschooler-friendly foam numbers found for a bargain fifty cents a piece in the clearance section at Kmart. Jack also led the merry knightlings in some rather rowdy running games before they tried their hands at a Jack-drawn pin-the-fire on the dragon, pass the parcel and a dragon can-tossing game that they all adored, made using empty cans and this cute dragon printable from German site Les Tissus Colbert. Such fun! Finally, what’s a knights and dragons party without a dragon to slay? My kids helped me adapt a dinosaur pinata we found for a bargain $14 at our local party shop. We made some wings, added some pipecleaner horns and – voila – one fierce dragon.